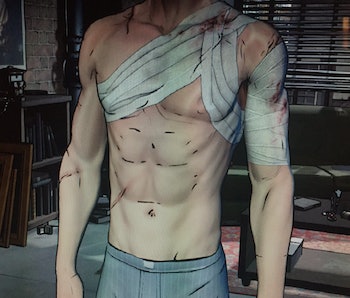 Update: After this article was posted, Emily Garrison deleted her tweets and confirmed with Inverse that there is no interaction with Bruce Wayne’s genitals in Batman: The Telltale Series.

Emily Garrison, the narrative designer on Batman: The Telltale Series has been tweeting some very interesting gameplay stills. Those screen-caps suggest players might be able to do something with Bruce Wayne’s junk in Episode 3, which was released October 25.

Batman: The Telltale Series is the latest project from the makers of The Walking Dead and Tales from the Borderlands. Their Batman game has earned rave reviews so far, for bucking the traditional Batman origin story and introducing new twists and characters to its version of Gotham. Like all of Telltale’s games, Batman is a point-and-click adventure where players choose Wayne’s dialogue and interactions within the story, potentially altering how the story plays out for the player. NPCs and objects are available for interactions when certain symbols appear on them. That’s the key to why Garrison’s images are so weird.

Because of Garrison’s tweets, we’re now fixated on a specific encounter within Episode 3: namely, whatever scene involves Bruce Wayne standing in his underwear. Are these images interactive parts of the game, as the symbols hovering above them would suggest? Will interactions with Bruce Wayne’s body have consequences for how the game’s story will ultimately unfold? Because both Selina Kyle and Vikki Vale are in the game, does that mean something regarding Batman’s nether region?

Garrison’s Twitter feed has been filled with players submitting their favorite interactions with the visibly wounded, and visibly underwear’d Bruce Wayne. Those exchanges are understandable given that she has taken full credit for the glory that is the Bruce Wayne’s digital butt.

Here’s hoping Garrison will be given full control over the next several Batman episodes to follow up on this important interactive juncture, and see whether or not these actions will have consequences for how the story will ultimately unfold.

Batman: The Telltale Series Episodes 1-3 are currently available for PlayStation 4, Xbox One, and PC.