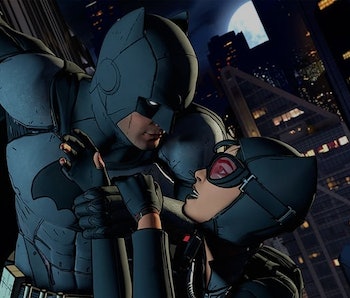 Telltale Games is no stranger to comic book adaptations. The Walking Dead and Wolf Among Us — a Fables story — are testaments to that. But Batman is a whole different ball game. It’s one thing to play around in the worlds of relatively recent creations, but trying to offer up the by-now classic Telltale experience with a character that’s been depicted and written in hundreds of different ways… sounds like a nightmare. Which is why Telltale went and sampled the best bits from all of them.

That’s not to say that Telltale isn’t going about it in their own particular idiom. The cel-shaded graphics are most welcome, and it’s not like every single narrative beat is predetermined. But all of the important bits that go into the Batman soup Telltale’s cooked up are taken from elsewhere. There’s aspects of Frank Miller’s Year One, Christopher Nolan’s Batman Begins, and even some bits pulled from the ongoing Gotham television show.

The plot, such as it is so far, harkens back to Bruce Wayne’s early days as Batman, but he’s still got the swagger of a character much more experienced. It’s clear there’s been some shit that’s gone down behind the scenes that players aren’t privy to; this isn’t an origin story, after all, but it’s not too terribly far down the road. But it the cel-shaded nature deviates from the Frank Miller palette for something closer to Batman: The Animated Series.

And then there’s Oswald Cobblepot, depicted in Telltale’s universe as a man around the same age as Bruce that’s from a once-rich family. Unlike Bruce, Gotham chewed up Oswald’s family and spat them out that much poorer. If the name sounds familiar, that’s because Oswald Cobblepot is commonly known as the Penguin in Batman stories, though he’s a young man here in the style of Gotham. And it works here as a mirror to the still-rich Bruce — and the possible organized crime connection of his late parents.

This is all to say… There is very little about Telltale’s first outing that is truly new. If anything, the game deftly weaves dozens of different strands from former tales together to form a cohesive whole. And the remarkable fact here isn’t just that it works, but that it works so well. A week later, I’m still not sure if I made the right calls. It’s all about juggling personas and expectations, and sometimes whats good for Bruce is bad for Bats, and vice versa. That’s what makes the truly good Batman stories great.