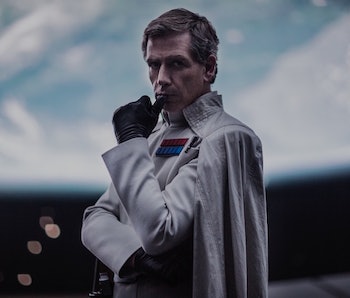 Director Orson Krennic, the big bad from Rogue One: A Star Wars Story, isn’t like those stuffy, upper-class villains we’ve come to expect from Star Wars. He’s an Imperial officer you’d really like to have a beer with.

Rogue One director Gareth Edwards recently told USA Today that Krennic is more of a blue-collar everyman than a high-born officer — he worked his way up from the bottom to become Director of Advanced Weapons Research rather than being born into the upper echelon of Imperial society. In that sense, he’s more akin to Anakin Skywalker than Grand Moff Tarkin, which could partially be why Darth Vader chose him to oversee the long-delayed Death Star project.

“It feels like if the Empire ever has a job vacancy, they go to the Royal Shakespeare Company to headhunt people,” Edwards said. “I like the idea that Ben’s character was much more working-class” and rose to power “through sheer force of personality and ideas.”

Part of it comes from actor Ben Mendelsohn’s performance. Edwards said Mendelsohn asked if he should adopt “a very posh English accent” in order to portray Krennic like the other baddies we’ve seen in Star Wars, but Edwards wanted Director Krennic to be different — someone who could represent the Empire’s internal struggles that we haven’t really seen portrayed on film before.

Visual effects supervisor John Knoll previously said Director Krennic represents the intensifying “palace intrigue going on in the Empire,” with lots of people struggling to move up in the ranks and gain favor, even going as far as trying to sabotage each other. Krennic himself has staked his entire reputation on making sure the Death Star is successful — and given where he started out, his reputation is really the only thing he has.