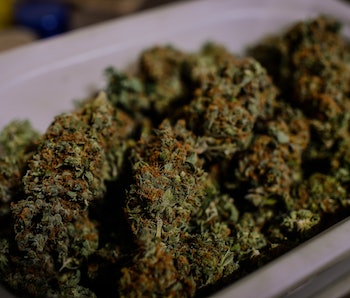 If voters approve it on November 8, California’s Proposition 64 would do a lot more than just make it easier to get marijuana: The most meaningful part of the measure for one segment of the population — people punished for marijuana-related offenses — isn’t the recreational weed, but a downsized jail sentence.

Right now, there are plenty of people in jail for nonviolent, pot-related crimes. A report published this month by Human Rights Watch and the American Civil Liberties Union offers comparison on the number of pot-related arrests vs. violent crime arrests in America:

The ACLU also found that between 2001 and 2010, blacks were 3.73 times more likely than whites to be arrested for marijuana, despite roughly equal usage rates. If it passes, Prop 64 could heavily shift the culture surrounding the penalties involving marijuana for the better.

Here’s Prop 64 at a glance: The most noteworthy effect seems to be allowing state residents and visitors over the age of 21 to buy, carry, and give away up to an ounce of weed. People could grow up to six marijuana plants in the privacy of their own home and also carry up to eight grams of concentrated cannabis, such as oils or waxes that are typically used for cooking or vaping. There are also safeguards when it comes to Prop 64, including no recreational pot use in public.

Here’s how it would affect Californians who have been punished for pot: The measure would allow judges to revisit convictions of weed-related crimes and possibly wipe people’s records for prior marijuana offenses. Any offenses that are made legal or reduced by Prop 64 would be eligible for re-sentencing. For example, selling marijuana for non-medical purposes is currently punishable by up to four years in state prison or county jail. Prop 64 would make selling marijuana without a license punishable by up to six months in county jail and/or a fine of up to $500. Furthermore, the measure would work retroactively and require the destruction of criminal records for individuals arrested or convicted for certain marijuana-related offenses within two years.

California has already been a leader when it comes to decriminalizing marijuana. Back in 2010, then-governor Arnold Schwarzenegger signed a bill that downgraded possession of one ounce or less of pot from a misdemeanor to an infraction. This was more so to alleviate the financial resources that were being used for possession arrests, but this still had profound effects on weed culture.

There are plenty of other effects that Prop 64 would have, such as the eventual issuing of licenses to sellers and a 15 percent sales tax on the drug. It’s possible that California will be able to capitalize on tax revenues and fees like Colorado did after it legalized weed. While the financial benefits definitely would help the economy, also important is how the ballot measure would notably affect the lives of those that have been negatively impacted by policies for nonviolent crimes involving a drug that’s becoming more and more normalized.

More like this
Science
Jan. 21, 2023
Deep-sea mining could power a clean energy future — but there’s a cost
By The Conversation, Scott Shackelford, Christiana Ochoa, David Bosco and Kerry Krutilla
Innovation
Jan. 19, 2023
A robot choreographer reveals why M3GAN — and all robots — should dance
By Molly Glick
Science
12 hours ago
Clean energy farms may endanger birds and bats — but the remains can reveal a solution
By Emma Foehringer Merchant and Undark
LEARN SOMETHING NEW EVERY DAY.
Related Tags
Share: