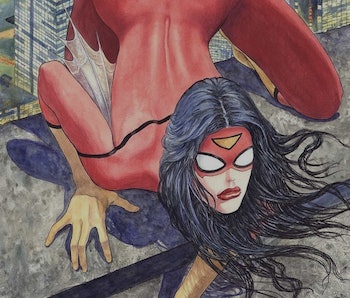 Remember that comic book artist who drew the since-removed cover of Spider-Woman bent over in a physically impossible position to show off her objectified heart-shaped ass? Or how about the comic book artist who drew both Spider-Gwen, Harley Quinn, and Wonder Woman in the same hyper-sexualized position to spite anyone who didn’t like the original Spider-Woman pic? Well, both of them are speaking at an Italian comic con next week … about women. Specifically, how they’ve mastered the art of drawing them.

Milo Manara and Frank Cho are hosting a joint interview and lecture at the LUCCA comic and games arts festival in Tuscany next week. Their topic? Women. The talk is called “Frank Cho, Milo Manara And Woman - A Dialogue Between Two Masters,” which sounds like the most insipid, self-gratifying way to describe two dudes chatting about how they like to draw Escher Girls. According to the translated description of the event:

“Frank Cho is capable like few other artists to evoke the female figure who has devoted much of his career. The Italian public will discuss his perspective on women and comics that portray starting with his series Liberty Meadows.”

That’s a pretty glowing description of Cho, who’s mostly a comic book artist who draws a lot of ire for how much he sexualizes his female subjects, only to later blame political correctness when people criticize his work. He’s the guy who, despite saying he was “built to draw Wonder Woman,” walked off Wonder Woman after six issues. Why? Because DC cropped one of his variant cover images to hide his Wonder Woman panty shot (seen above).

“Thanks to the social media, we have entered into a dangerous era of Salem witch trials where no one is safe,” Cho said.

Manara isn’t nearly as rude as Cho, but he’s definitely more blissfully unaware. When asked why he drew Spider-Woman with such unrealistic proportions, he said it wasn’t his fault if that’s how he draws women, it’s because of evolution. That’s a very generic response when some men are criticized for sexualizing women, blaming it on subconscious biology rather than taking responsibility for their own actions.

“If you go on a beach now, you will see girls who have skimpy swimwear, which allows you to fully ‘read the shape of their bodies. Of course, for some it can be a disturbing image, but not for me,” Manara said.

While these men might be talented artists, neither of them are qualified to speak as “masters” of drawing women, because in order to draw something, you have to understand it. Neither of these men have bothered to know or care about what women want to see (or be) in comic books. They’d rather complain about evolution or the “PC Police” rather than acknowledge that they don’t know women as well as they thought they did.

*Update: Changed Marvel to DC in reference to Cho’s employer.

More like this
Entertainment
6.17.2022 11:00 AM
15 years ago, Marvel revealed its most ambitious crossover ever
By Richard Newby
Culture
6.13.2022 6:03 PM
Everything we learned about Spider-Man: Across the Spider-Verse at the Annecy Festival
By Robin Bea
Entertainment
6.24.2022 11:15 AM
Behind the scenes at “Herogasm,” The Boys’ most NSFW episode ever
By Aaron Pruner and Jake Kleinman
Share: