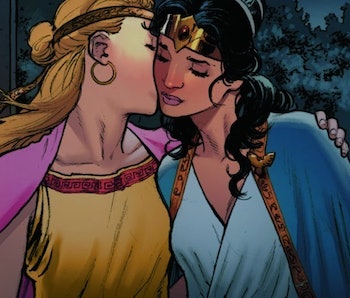 Wonder Woman is finally out — validating the hopes of fans who have seen the Amazonian warrior as a role model for queer culture for years.

Comics writer Greg Rucka, author of DC’s current Wonder Woman: Year One title, told the world on Wednesday that Diana Prince, aka Wonder Woman, is canonically queer. The question that was posed to him was whether Wonder Woman experiences “romantic and/or sexual interest toward persons of the same gender,” and Rucka replied with a simple and resounding, “yes.” While fans have decreed this admission a huge leap forward for bisexual visibility in culture, it’s not necessarily a revelation.

To Rucka’s credit, he admits that though our culture would consider Wonder Woman queer — because she experiences sexual and romantic feelings for women in addition to men — her backstory complicates that definition a little bit. Themyscira, where Wonder Woman was raised, “is supposed to be paradise. You’re supposed to be able to live happily,” Rucka said. “You’re supposed to be able — in a context where one can live happily, and part of what an individual needs for that happiness is to have a partner to have a fulfilling, romantic, and sexual relationship. And the only options are women. But an Amazon doesn’t look at another Amazon and say, ‘You’re gay.’ They don’t. The concept doesn’t exist.”

Of course, Rucka’s comic is far from the first to suggest that Wonder Woman is attracted to people of different genders, but Rucka is the first writer to proclaim the concept publicly. Recently, Grant Morrison and Yanick Paquette’s Wonder Woman: Earth One alluded to Wonder Woman’s past relationships with women, which she experienced before meeting Steve Trevor. Even Earth One wasn’t the first.

Because Wonder Woman has always been an eroticized character, beginning with her original creator William Moulton Marston’s being transfixed by images of sexual bondage, allowing her most contemporary stories to explore her bisexuality, or queerness, is a complex process. On one hand, representation of sexual preferences in comics, especially comics written with children in mind, typically skirts mentions of actual sexual acts — a notable example of lesbian romance in popular children’s media is Rebecca Sugar’s work on Cartoon Network’s Steven Universe.

Wonder Woman, however, is an adult character, and her many, many appearances in comics, animation, merchandising, and feature films serve an array of audiences. It’s certainly a worthwhile goal, honoring a fictional character’s queerness in all-ages media, but it will also be a challenging one for DC moving forward. It remains to be seen, subsequently, how DC’s Wonder Woman film, starring Gal Gadot as Diana, will address the character’s sexuality. Given that DC’s most recent comics have touched on her feelings for women, it won’t come as a huge shock if the live-action film does as well.