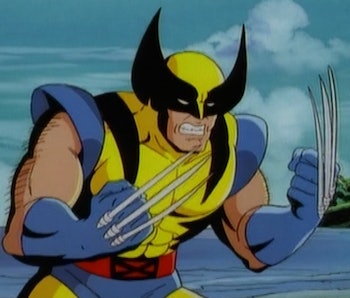 You know the trailer for Logan is a great piece of art when you can mix it with scenes from the X-Men cartoons, and it still works. Who knew the animated blue and yellow Wolverine could be so emotional? A YouTuber who has been making mash-ups of X-Men cartoons with X-Men trailers might have just hit some kind of alchemic gold when they decided to tackle the new Logan trailer as their next project.

YouTube mash-up maker Philysteak has been combining all the recent X-Men film trailers with scenes from the classic cartoon series — Logan is no exception. Philysteak used the iconic Johnny Cash rendition of “Hurt,” like in the live-action trailer, and laid in on top of scenes of a sad Wolverine from 1992’s X-Men: The Animated Series, and used scenes from the 2003 cartoon X-Men: Evolution for X-23 — where her character was created specifically for the show. The result? Philysteak managed to craft a surprisingly accurate trailer that is just as dark in atmosphere as the live-action trailer.

For the most part, Philysteak’s videos reimagine the colorful cartoon series in the dark mold of the films, but also highlight how weirdly avant-garde the original cartoons were. The animated shows certainly don’t fit the mold of recent cartoons like Adventure Time, or even modern superhero cartoons like Avengers Assemble. X-Men: The Animated Series was decidedly ‘90s and probably wouldn’t have looked out-of-place on MTV, or a similar network that hosted dark, weirdly colorful cartoons.

It also helps that you can probably use Cash’s version of “Hurt” on anything and make it moody and dramatic just from that. Either way, the mash-up proves that the X-Men series will always share the same core DNA regardless of medium, only don’t expect too much gore from the cartoons. There’s probably very little chance Philysteak could recreate the red band trailer with just scenes from the animated series.

More like this
Entertainment
7.2.2022 11:30 AM
You need to watch the most underrated superhero thriller on HBO Max before it leaves next week
By Richard Newby
Entertainment
6.22.2022 11:30 AM
Marvel’s Kevin Feige teases a fix for Phase 4’s biggest problem
By Eric Francisco
Entertainment
6.29.2022 9:48 PM
Fantastic Four leak allegedly reveals the shocking actor playing Doctor Doom
By Dais Johnston
Related Tags
Share: