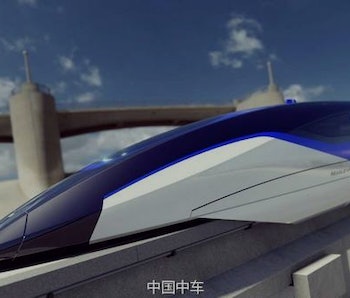 China’s Ministry of Science and Technology took the wraps off plans for a maglev train to run between Beijing and Shanghai on Friday. The train is expected to run at a staggering 600 km/h (372mph), meaning journeys across the near-700 mile distance will take just two hours. The high speeds would beat the Shanghai maglev to become the world’s fastest commercially operated levitating train.

Maglev is a fascinating technology where the train floats above the tracks using a series of magnets. Wear and tear is significantly reduced, as there’s no wheels touching the floor, and trains are able to reach extremely high speeds. The Shanghai maglev, which connects the airport to the city center, holds the current record for world’s fastest commercial train. The maglev operates at nearly 270mph, covering the 19 mile journey in just eight minutes.

The Beijing to Shanghai project, according to CCTVNews, is one of three projects launched by CRRC Corporation Limited. The state-owned firm is the world’s largest rolling stock manufacturer, and alongside the maglev, it has plans for a cross-border train running at nearly 250mph, and a new safety system designed to stop incidents before they occur.

Although China’s project would be fast, it wouldn’t be the world’s fastest maglev project. Scientists in New Mexico, working with the U.S. Air Force, have developed a test track capable of reaching 633 mph. They achieved this by cooling the tracks with liquid helium, reaching four degrees Kelvin.

Maglev may not also prove to be the fastest form of train transport. Elon Musk’s Hyperloop, which places trains in a vacuum tube to reach their destination with little friction, is largely in the theoretical states, but Musk’s SpaceX venture is looking to encourage investment and innovation through a competition set to take place in 2017.

More like this
Innovation
22 hours ago
Artificial photosynthesis can grow plants without light — and may solve a planetary dilemma
By Steph Lee
Innovation
6.25.2022 10:00 AM
9 veggies that are healthier cooked than raw
By Laura Brown and The Conversation
Innovation
6.24.2022 5:00 AM
Beam-steering radio technology could help autonomous cars finally hit the road
By Sascha Brodsky
Share: