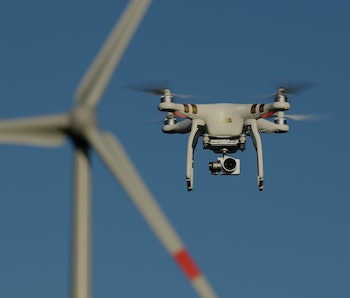 If you’re planning on taking a holiday to Sweden soon, here’s your travel reminder to leave your drone behind.

Basically, it doesn’t matter if you’re trying to film a wedding or collect surveillance for a government agency — you’re going to have to pay the Swedish government a fee to get permission. And a permit isn’t guaranteed — Sverigesradio reports that administrators can turn down any requests that appear to outweigh public good.

Sweden has been much stricter in drone regulation than the United States, but the federal government is finally starting to catch up. In 2015, the Federal Aviation Administration fined Chicago-based photography company SkyPan International for $1.9 million for illegally flying drones in restricted airspace without authorizations. In May the FAA issued “best practices” for private drone use, reaffirming citizens’ rights to privacy, but they have yet to put any actual regulations on the books.

Drones are becoming an increasingly common part of everyday life and can aid in functions ranging from delivery to helping in disaster relief efforts. But the technology has also raised a number of issues around privacy and civil rights. In the United States, local government agencies have been known to use drones to survey protest movements. FAA regulations on drone operations released in August failed to include any rules regarding privacy rights. Consumer drones are selling at faster rates than laws can keep up with and privacy regulations still vary between states.