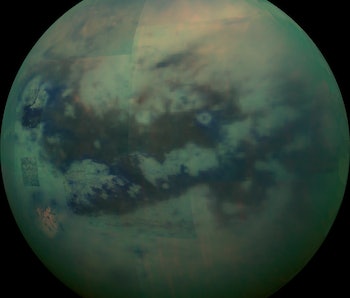 Winter is coming to Titan’s southern hemisphere, but don’t expect any Direwolves or White Walkers. Instead, you can be on the lookout for some extraordinary chemistry to permeate the planet’s atmosphere and surface, according to researchers at the 48th annual Division for Planetary Sciences meeting in Pasadena, California. This is critical when you remember that Saturn’s largest moon is among the most exciting places to look for extraterrestrial life.

With its clouded atmosphere and lakes of liquid hydrocarbons, Titan is the only other place we know of in the solar system (aside from the Earth) with an active weather cycle that continuously changes the landscape below. NASA’s Cassini spacecraft has been exploring the Saturnian system since 2004, and is on its way to completing 127 flybys of Titan that have accumulated a trove of data related to the moon’s potential to sustain life.

“Cassini’s long mission, and frequent visits to Titan, have allowed us to observe the pattern of seasonal changes on Titan, in exquisite detail, for the first time,” Athena Coustenis of the Observatoire de Paris explained during the meeting.

Winter is tightening its grip on Titan’s southern hemisphere, while the northern hemisphere is nearing summer solstice. The major shift in temperature has had a dramatic effect on the moon’s atmosphere. Researchers have observed temperatures dropping as much as 40 degrees in just four years, compared to the gradual warming — six degrees in six years — seen in the north.

The seasonal shift has spawned a massive polar vortex that has taken root in the upper atmosphere just above the south pole. As that part of the moon transitions into winter’s shadow, ultraviolet light from the sun gets blocked out, causing the amount of trace gases — such as methylacetylene and benzene, which have only been seen at northern latitudes — to rapidly build up inside the storm.

Cassini has worked to provide a big picture view of Titan’s seasons, which will help scientists understand what role the seasons play in habitability by understanding the photochemical processes taking place. “We’ve had the chance to witness the onset of winter from the beginning, and are approaching the peak time for these gas-production processes in the southern hemisphere,” Coustenis explained. “We are now looking for new molecules in the atmosphere above Titan’s south polar region that were predicted by our computer models. Making these detections will help us understand the photochemistry going on.”

Of course, there is only so much we can glean from a flyby probe. Scientists around the world are making the case for NASA, and others, to green-light a mission that would directly investigate Titan’s surface and liquid methane oceans for signs of life. Understanding the changing dynamics of the moon’s seasons are an important way to unravel the types of geological and chemical processes that could encourage or hinder the evolution of life on what is a very cold, but very vibrant world.