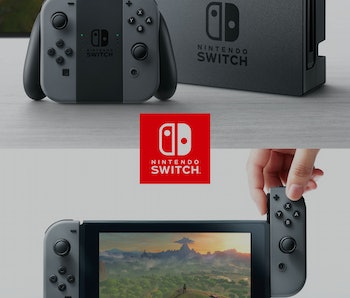 After months of speculation, Nintendo’s next gaming console — previously codenamed Nintendo NX — has been unveiled as the Nintendo Switch, a hybrid machine that combines home consoles and portable gaming expected to release in March 2017. Just by appearances, the Switch looks like a major improvement over the same idea Nintendo tried with its last console, the Wii U, which had similar features but was limited in its capabilities.

In the trailer released Thursday, the console’s functionality is shown as a smooth transition between on-the-go and home entertainment. At home, the console works like usual with a wireless controller. When taken on the go, the controller can be halved and placed on both sides of the tablet screen. The tablet itself can be propped up with the controller parts removed again.

Imagine having a controller for an iPad: That’s what the Nintendo Switch looks like.

The debut video opens with a dude playing Legend of Zelda: Breath of the Wild on his home TV before “switching” to portable with no major loss in fidelity. Other games featured are The Elder Scrolls V: Skyrim, Mario Kart, NBA 2K, and what looks like the next major Super Mario title.

A lot of what the Switch turned out to be was reported by Eurogamer back in July, which correctly predicted a hybrid console that can be taken on the go.

The image below shows the Nintendo Switch in a nutshell: It’s a home console that can be transformed into a modular machine in seconds.

The console appears to use cartridges roughly the same size of 3DS game cartridges:

In the Skyrim demonstration, gamers keep their progress whether they’re on the move or at home:

There’s also an expected multiplayer feature, in which two Switch consoles can somehow link up for multiple people:

But multiple Switch consoles aren’t necessary. In the trailer, two players are shown on one Switch, although the exact details to how any multiplayer works remains TBD.

The full trailer can be seen below. The Nintendo Switch is expected to arrive March 2017.