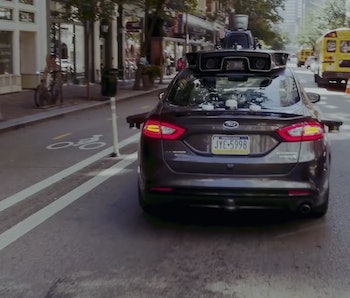 As the future of self-driving cars becomes a reality, federal regulators are finally starting to step up their game. On Wednesday, Department of Transportation Secretary Anthony Foxx announced that the agency is going to form a committee of auto industry veterans and technologists to shape federal laws around autonomous cars to keep up with rapid advancement.

The fifteen-person committee will memorably be known as the Advisory Committee on Automation in Transportation — ACAT! — and will assist the DOT in shaping federal policy for automated transportation.

“This committee will help determine how, when, and where automated technology will transform the way we move,” Foxx said. “The Department has advanced some of the life-saving benefits of automated technologies, including automated vehicle policy, but we are looking outside the government for innovative and thoughtful leaders to uncover its full potential across all modes.”

The committee is still in the nomination process. Each member will serve a term of two years, with no more than two consecutive terms, which is a very long time in the world of autonomous cars. To put things in perspective, in October 2014, there weren’t any self-driving cars on public streets. In America today, Google is testing them in California and Texas, Uber is testing them with customers in Pittsburgh, and Tesla’s Autopilot technology is going through update after update.

The committee will focus on emerging innovations in the field to be “prepared when disruptive technologies emerge,” which should be often.

The Obama administration has openly championed the future of driverless vehicles in the past year.

The progress we’ve seen in automated vehicles over the past several years shows what our country is capable of when our engineers and entrepreneurs, our scientists and our students — backed by federal and private investment — pour their best work and brightest ideas toward a big, bold goal,” Obama writes in an [op-ed published in the Pittsburgh Post-Gazette last month.

Laws regarding self-driving cars currently remain open to decision by the states, but in September, the National Highway Traffic Safety Administration released suggested guidelines for driverless technology that encouraged increased testing and data collection by manufacturers.

According to a spokesperson for the DOT, no nominations for the committee have been received yet. Nominations will made public on the Federal Register as they are updated. With more and more companies announcing plans for a driverless future by 2020, the ACAT committee could offer a critical means of collaboration between innovators and government.

We wouldn’t be surprised if Elon Musk is one of the first names on the list.