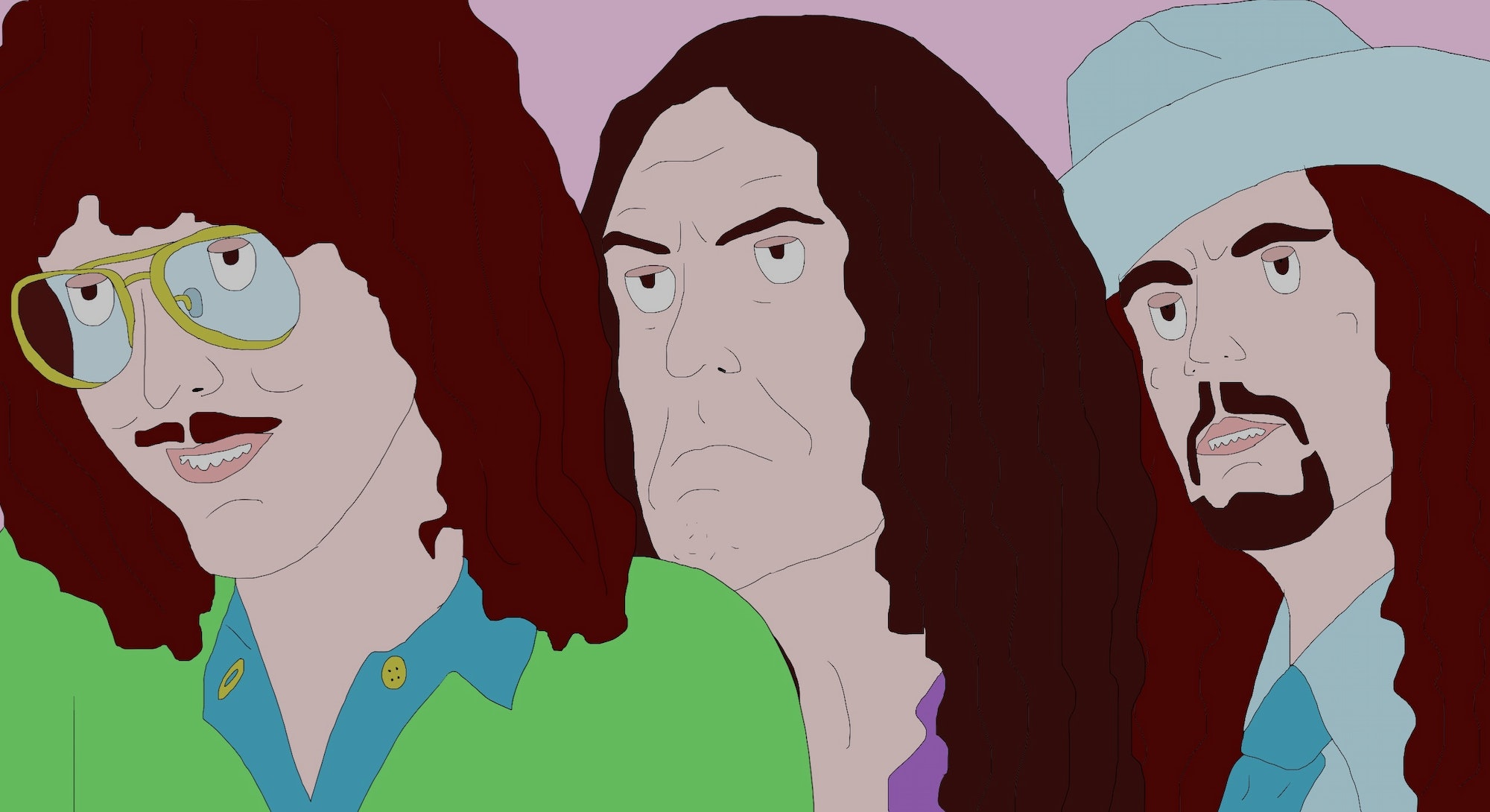 Weird Al is a unique cultural icon, having built an empire on parodying the work of other popular artists since the 1980s. Generation X kids loved him, Generation Y kids loved him, and even rascal Millennial kids now love him. Everyone loves him because he is weird and also named Al.

It’s not that I am prejudiced against musical comedy. Tenacious D? Excellent. Flight of the Conchords? Bring ‘em. Anything Rachel Bloom sings in Crazy Ex-Girlfriend? I’m crazy for it. Weird Al’s style, while effective, is never something I’ve understood — he’s not the first guy to parody music, nor to own an accordion or a square ton of Hawaiian shirts. Why have I only been in serious relationships with men willing to go down with the SS Weird Al Is A Genius?

Look, I’m not saying all Weird Al fans are men. I am saying that every person who has ever lectured me for more than 20 minutes about Weird Al’s incredible influence on modern popular music has been a man. Similarly, every time I’ve been told “you’re wrong” after declaring that “White & Nerdy” was the worst song played at my eighth grade dance, even worse than James Blunt’s “You’re Beautiful,” also came from a man.

But I’m open to learning, so I put out a call for male fans of Weird Al to scold me for what has, besides a deep-seated problem with boundaries, cost me most in past relationships. Although I’m pretty sure not liking Weird Al is what did it. For sure.

Every volunteer “weirdhead” sent me longer responses that I thought imaginable. I had to cut most answers down. Why did they have so much to say about the nuances of the synth in the ‘90s of Al’s discography? Truly, I cannot say. Most marriage vows are a couple of sentences. These men, from all over the country and walks of life, love Weird Al.

Why am I wrong?

Kevin, Journalist: He’s not just respected by comedians, he’s respected by the vast majority of musicians he’s parodied. He’s made his own unique brand of comedy that no one would dare ape and has done so for 40 years. I also think that he really is the best at what he does.

Ben from Montreal: Weird Al shouldn’t work. He’s technically proficient at a few instruments, his vocal range is quite good, but strictly speaking it makes no sense that he’s done as well for himself as he has. You can’t even put him in the same category as other novelty bands like Tenacious D or Flight of the Conchords because their songs are originals. (Author’s Note: Exactly.)

Karstan, System Administrator: You’re not wrong. A little harsh, though. I think it’s more like a 7th grader getting a B.

How did you get into Weird Al?

Kevin: My weird uncle (not my weirdest uncle, but definitely somewhere on the weird scale) gave me a copy of Running With Scissors when I was in fifth grade. A couple of years before that, a friend came over and played a tape of Amish Paradise, but I think I needed the full album to really get into him.

John, @koolaid689: At the time I felt like I needed to have a favorite band, and I was sampling different types of music to see which would appeal to me. I listened to “Running with Scissors” and thought it was amazing. I loved comedy, but the only comedic things I consumed were The Simpsons, Jim Carrey, and anything on Nickelodeon. So Al’s brand of comedy was new to me.

Ben: I was lucky enough to be just the right age to catch the short-lived Weird Al Show, so I had a pretty good in with the guy early on. After watching his irreverent film UHF I flipped my prepubescent shit.

Derek, Wrestling Podcaster: I was a child who grew up in the ‘80s and I feel like my age group is pretty much the only age group that he was popular with at the time.

Joe: I remember seeing the video for “Fat” on MTV when I was seven. It cracked me up when he puffs up into the fat suit, and it STILL DOES.

Do you listen to him now?

Kevin: I’ve probably only listened to his last few albums a couple times each when they first came out. I’ll still occasionally piss everyone off at the karaoke bar by singing “The Saga Begins.”

John: I’ve always been more inclined to listen to his work from the ‘90s, I feel like that was when he was at the peak of his creativity. His ‘80s stuff is a little too wacky and juvenile at times and his ‘00s work doesn’t appeal to me as much.

Karstan: I listen to them when they come out. The last album was pretty good.

Derek: The songs had a short shelf life of appeal for me. I’d hear them five or six times and they suddenly became irrelevant.

Joe: I’m old and lame and don’t buy albums, but the other day my friend showed me Beyonce’s Lemonade. It was really good.

What is the cultural significance of Weird Al?

Kevin: He also, for better or worse, helped bring the song parody into mainstream consciousness and inspired a generation of comedians with musical talent to make a go at a hybrid career. OK, so maybe Weird Al’s legacy is inspiring a bunch of horrible YouTube parodies, but the modern concept of parody is so fucked right now I don’t think he deserves much blame for that.

John: That’s tough to say. I guess one thing he did of significance is introduce people to songs and genres they may have otherwise never listened to. The only thing keeping him from being relevant is himself.

Ben: As a kid, it was just funny to see a grown man talking about “Yoda” or being “Fat,” and that is his shtick for sure. I think it’s one of these cases of “if you can’t join ‘em, mock ‘em until they respect you.” Shit, it’s even more pertinent now since the industry seems to be simultaneously devoid of substance.

Karstan: I think the value is that he is able to continue to produce this stuff at a pretty decent production value, he’s amazing on the accordion, but probably mostly nostalgia.

Derek: I do think the man is immensely talented. Not only does he write all of these alternate lyrics that fit into the context of what his parody is about, but have you ever seen the man play a pop song, non-parody mega mix live with his accordion? Holy shit, it’s amazing.

Do you think his work has evolved in his thirty-year career?

Kevin: Yes and no. The evolutions he’s made have been relatively minor, and that’s ok! (Author’s Note: This is an extremely defensive answer.)

John: But even his original songs, songs that weren’t parodies per say, evolved too. His themes got a little darker as he progressed, his ideas became more complex. (Author’s Note: I don’t think this is true and I refuse to research it.)

Karstan: Not even a little.

Joe: I don’t think he has, but then again neither did the Kinks, and they rock too.

Why does every man I date drop two months into the relationship that he’s personally offended that I dont like Weird Al?

Kevin: Because you date fellow comedians, who are simultaneously some of the most brilliant and most garbage people on the planet. (Author’s Note: This is a sick-ass burn.)

John: Like a lot of music, Weird Al takes some guys back to happier times. They have a strong positive connection to him, and if you don’t particularly care for Al, they don’t understand.

Ben: You seem like a nice young lady. Seems like a weird talking point to hinge a relationship on.

Derek: He’s a clown. He’s fun. He’s not really to be taken seriously as a musician in any way. And for most of us, he’s a part of our childhood.

It goes without saying that while I respect Weird Al for his weird hustle, I remain unswayed. Also, they hurt my feelings at the end. If anything, I think I managed to plant seeds of doubt in something a group of men enjoyed since they were children, and the feeling of robbing them of joy has left me full of light and energy. Next on the docket: Yu-Gi-Oh! cards and paintball.