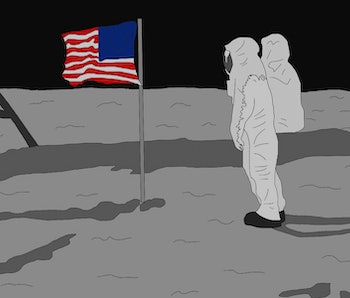 I’d never questioned the moon landing before last week. But after seeing the Sundance hit mockumentary Operation Avalanche, a fictionalized doc that plays as a satirical fantasy for those who believe that Apollo 11’s infamous 1969 moon landing was an elaborate hoax, my interest was piqued, and I sought out some of some of these non-believers.

The good news, at least for this experiment, was that they weren’t very hard to find. At the turn of the century, a Gallup poll indicated that about six percent of Americans said they thought the whole moon landing was faked, and another five percent said they were on the fence about the whole “one small step for man” business. That’s a lot of people, and a lot of theories.

Los Angeles is a great place to find crazy people. In a city where some level of self-delusion is normal, there are plenty of well-educated people with pockets full of crystals, waiting for a role in a Colgate commercial that will never come. To be honest, that’s sort of who I was expecting when I put out the call for moon conspiracy theorists, but the three folks who responded were all uniquely qualified and seemingly sane. I set my table and prepared to consider anything, whether it be the theory that Stanley Kubrick directed the whole faked operation or that sweet Buzz Aldrin has been spewing lies for more than half of his life.

Here’s the panel that joined me for lunch: Manny Hagopian works in video games and comedy, Evan Ponter is a creative strategy manager, and Melinda Kashner is an office admin who moonlights as a standup comedian. The first two were certain of their conviction that Kubrick; Kashner, like myself, was looking to be convinced. I bought moon pies for the occasion, but the novelty was lost — this was serious business.

Here was what we talked about — pay close attention, because these guys know their stuff. I’ll chime in to decrypt the lingo.

So where do you stand on the moon landing? On the whole.

Evan: I believe it was a tool for the U.S. to counter Russian space prowess to help morally boost the American people’s belief in the hegemonic powers of the United States defense infrastructure.

Manny: I want to believe it was faked. It’s easy to believe the government is capable of faking it.

Melinda: We’ve definitely probably landed on the moon at some point. But maybe not on that fateful day in 1960-whatever.

Have you always felt this way? What changed your mind?

Evan: Not at all! As a kid, I was obsessed with space travel and read a lot about how we got to the moon. It was later that the context of the situation started to unravel the official narrative.

Manny: I’ve felt suspicious since I think the fifth grade. At first it was for fun, a different way of thinking, but it gradually turned into an actual possibility [that it was faked].

Melinda: I’m the kind of person who will take a seed of doubt and fucking nurture that baby until it’s growing and blooming and taller than your house. I don’t remember how old I was when the Kubrick theory was introduced to me, maybe early teens, but as soon as it was suggested to me that there was a reason to doubt the moon landing I believed it was 100 percent a possibility.

Note: Moon landing conspiracy theories have existed for nearly as long as the moon landing itself, but the three most prominent theories are connected to the following: The United States’s desire to win the Space Race over the Russians during the Cold War, an attempt by NASA to stage a “win” in order to continue its funding from the government, and the government staging the landing in the interest of raising American morale to detract from the growing disillusion surrounding the Vietnam War. Over the years theories around these themes have been fleshed out and implicated a number of high-profile conspirators, including JFK, Kubrick, and even Armstrong himself.

Was there any evidence that solidified your opinion once you started to get suspicious?

Evan: I rented Dr. Steven Thomas’s The Moon Landing Hoax: The Eagle That Never Landed from the library at my college. That did me in.

Manny: I watched a special on Fox when I was younger, which brought me into the work of the fake moon landing. Later, I did my own research and it began to pique my interest. One suspicious thing after another seemed crazy to be a coincidence. Mostly, the death of Gus Grissom. The mystery surrounding his death was extremely interesting to me, not to mention the safety inspector who also died shortly after.

Note: Through the years, many have noted the deaths of those in the NASA program who had become disillusioned with the program following the Apollo 1 disaster in 1967, which killed three astronauts during a trial run at Cape Kennedy.

The safety inspector Manny refers to is named Tom Barron, who wrote a 500-page report of NASA safety oversights immediately following the Apollo 1 disaster, and delivered it in April 1967. Six days later, he, his wife, and his stepdaughter were hit by a train while driving; they all died. No foul play was declared, but it certainly added fuel to rumors of a cover-up in the years to come.

Melinda: It’s more that I want to believe. I like the idea of a shadow government or a room full of people that pull all the strings. I’m a Cold War junkie and the more I learn about it, the more I think faking the moon landing it totally something we would do.

Are you open to changing your mind?

Evan: Of course! That’s the great thing about science.

Manny: For sure. Mostly because the conspiracies regarding the moon landing are nothing compared to the bigger picture of Earth’s own mysteries.

Melinda: Absolutely. Is there hard-hitting evidence that it happened the way they say it did? I know there’s like a picture and some audio but, I can’t think of any evidence that would 100% convince me. But if it’s there I’ll hear it.

What reading material would you recommend to basics like me who believe the moon landing is real?

Note: Okay, I’ll bite, Evan. This is a favorite of conspiracy theorists, and is rooted in a piece published about space radiation written by Dr. James Van Allen in 1961. However, some mathematical analyses of the amount of radiation the astronauts would have been exposed to in 1969 would have been found to be perfectly safe.

Manny: I’d say for them to look into the death of Gus Grissom. Grissom was supposed to be Neil Armstrong, but he died during a routine simulation shortly after stating that he was having doubts about America’s ability to reach the moon. Another thing is the fact that 700 boxes of the original moon landing data and video footage has gone missing.

Are there specific moon landing theories that you don’t believe in?

Evan: That Stanley Kubrick was involved.

Note: This theory is explained pretty exhaustively in a documentary hinged around the production of Kubrick’s The Shining, called Room 237.

Manny: The BS about the flag waving. It’s been explained over and over again, but people still use it as proof. It makes us all look crazy!

Note: In regards to the “waving flag theory,” which is essentially that “jet fuel” doesn’t melt steel beams’ of the moon landing conspiracy community, stating that since there is no atmosphere on the moon, there’s no way that the American flag planted by Apollo 11 astronauts could have blown in the breeze. However, NASA upholds that it does not take an actual gust of wind to get a flag flapping, and the theory is nil.

Melinda: I don’t know enough about them yet. I’m still open to anything.

Okay, enough restraint. If you’re announcing to the world why they’ve been lied to about the moon landing their entire lives, what are you gonna say?

Evan: Because they never give public comments on the situation without NASA filtering the press conference. That’s control. They’re liars, but they lied because they knew it’d be good for the morale of the American people.

Manny: The U.S. was dead last in the space race. Sputnik was launched long before the U.S. even got a rocket off the ground. The only way to win the Cold War was to win the Space Race. There was only one option to keep the U.S. from being defeated … land on the moon.

Launch the ship into the atmosphere, have them circle the planet, then land back on Earth. All while showing video footage of them landing on the moon. Video footage which is almost identical to the Capricorn One that came out less than 10 years later.

It’s easier than it sounds.

Melinda: I’m sure Snowdens have existed for a long time, they just didn’t have the internet. There have to be so many crazy things they’re keeping from us, right???

Were you keeping score? In the space of an hour, we sped through five different theories, most of which I’d never heard before, and all from level-headed people. Although I wish they’d eaten the moon pies.

Need additional proof that everything you’ve ever learned is wrong? Try the BBC’s conspiracy doc from last year, Dark Side of the Moon, and the exhaustive One Small Step?. If nothing else, it’s one giant step for small talk.

More like this
Science
10 hours ago
Astronomers discover a quirky star with a surprisingly galactic feature
By Nancy Atkinson and Universe Today
Science
6.30.2022 10:45 AM
These 5 objects could be Webb's full-color first images
By Kiona Smith
Science
6.30.2022 10:00 AM
Behold! Curiosity discovers Martian rocks contain an essential ingredient of life
By Allison Parshall
Related Tags
Share: