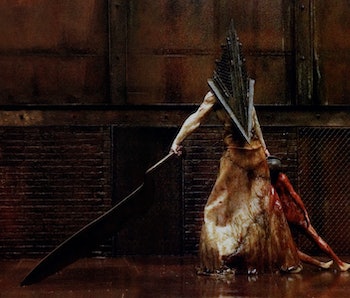 Video games have always been an excellent platform for horror and suspense. Interactive by their very nature, they are the perfect testing grounds for both jump scares and more twisted terrors of a cerebral nature. As a result, video games are full of terrifying characters, some of which are the most iconic in the medium.

We picked out five of the most horrifying video game baddies that ever stalked the digital halls. We recommend reading this one with the lights on.

Sure, this is an obvious choice, but there’s a reason for that. Pyramid Head terrifies on both the physical and psychological levels, embodying Silent Hill 2’s protagonist James Sunderland’s guilt and desire. Pyramid Head is James’s psyche’s way of punishing him for murdering his wife in the most haunting way possible. His lurching movements, bloody butcher’s garb, and the bizarre, grotesque pyramid helmet certainly don’t help matters.

Headcrabs are probably the most iconic alien in the Half-Life series. They also make delightful hats. But these nasty little parasites are no joke. They latch onto the heads of their hosts, turning them into terrifying, zombie-like husks. The worst part? You can hear the screams of their hosts, somewhere deep inside, begging to be put out of their misery.

Remember when we talked about how video games are the perfect medium for horror? Enter the xenomorph of Alien fame. The xenomorph was scary on screen, but now that you’re running from it in a video game, it’s positively terrifying. It’s also smart and adapts to your behavior. If it finds out you’ve been using the lockers as a hiding spot, it will begin to look for you there. Alien: Isolation also has fantastic sound design, significantly upping the suspense as you can hear the tiniest of details.

While Left 4 Dead was generally a fun exercise in mass-zombie destruction, it did have its creepy bits, the scariest being the Witch. Things would be going smoothly enough on your trek to the nearest safe house, until you heard that tell-tale crying: A witch was nearby. You couldn’t see her, but you knew she was there, and if you made any sudden movement or noise, if you even so much as flicked on your flashlight, she would be on top of you in an instant, tearing at your face with her long, bloody claws.

No list about scary video games is complete without Fatal Frame, and there’s no video game monster scarier than Fatal Frame II’s Kusabi. Also known as Rope Man, Kusabi is a horrific spirit powerful enough to kill you instantly. Kusabi was the victim of a sacrifice, tortured gruesomely before being thrown into a pit. Sweet dreams!

More like this
Gaming
Jan. 30, 2023
Where to Find Every Weapon in Dead Space and Their Schematic Upgrades
By Joseph Yaden
Gaming
Jan. 25, 2023
5 years ago, the most heartfelt indie platformer changed video games forever
By Willa Rowe
Gaming
Jan. 19, 2023
Eight major trends that will shape the games industry in 2023
By Robin Bea
LEARN SOMETHING NEW EVERY DAY.
Related Tags
Share: