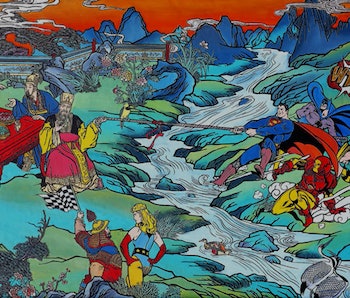 Chinese artist Jacky Tsai has something to tell us about superheroes. Or maybe it’s the movie industry? Or maybe it’s actually about globalization? In his new exhibit, “The Harmonious Society,” Tsai combines traditional Chinese imagery with classic superhero faces — Wonder Woman, Batman, the Flash — creating a commentary on the meeting between American and Chinese cultures through the power of brands.

“Welcome Refugees” depicts superheroes as they beg for sanctuary in China, which says a lot about western capitalism moving into China as a new economic market after the United States’s disastrous 2008 recession. Back in 2008, that stagnant financial period crippled plenty of westernized economies, but not China’s. At the same time, if you’re familiar with the encroaching Chinese dominance in film production, this could double as commentary about the increasing reliance on the Chinese film market by Hollywood, with the film industry pandering to an increasingly skeptical Chinese audience.

Tsai created the following works through lacquer, an art technique where images are carved into wood before given a gleaming coat of lacquer.

“The Retirement” shows an aged Superman as his grandchildren lavishly play with money. An indictment of recent scandals in China in which the wealthy scions of China’s political and social elite have been given preferential treatment in a supposedly equal society. Turns out Superman’s kryptonite is actually the moral decay of Chinese wealth.

Pokemon Go is currently not available in China. That’s okay though, as these large spirits will occupy themselves by collecting other commodities of the branded west.

Macau is kind of like the Monaco of China. Superman (who sports a British Pound instead of an “S”) appears to be finding out first-hand why the house always wins.

Of course, maybe Superman gets comped a room after his poor showing in the last piece. Surrounded by women from the east and west, Superman is officially a global icon of sorts.

The exhibit is currently running in the Fine Art Society in London through November 8. Other works in the series can be found on Tsai’s personal website.

More like this
Entertainment
6.27.2022 1:30 PM
17 years ago, DC copied Marvel — and told the worst Batman story ever
By Richard Newby
Entertainment
6.16.2022 11:30 AM
30 years ago, Tim Burton made the sexiest and most sinister superhero movie
By Mónica Marie Zorrilla
Entertainment
6.21.2022 9:00 AM
Ms. Marvel Episode 3 release date, time, cast, trailer, and schedule for the Disney Plus show
By Jeff Spry
Related Tags
Share: