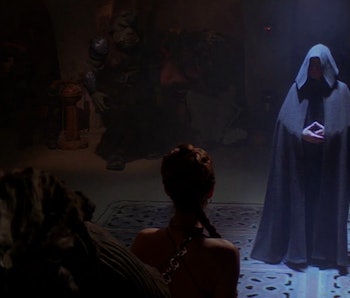 Aside from the looming presence of Darth Vader there aren’t any Jedi in Rogue One — but the Force will still play a major part in the film, thanks to the planet of Jedha. Jedha holds a special place in the Jedi lore of Star Wars, and it looks like Jyn Erso and her band of Rebel spies will run into some extremely devout believers and followers of the Force on the planet.

The Topps Star Wars Card Trader app recently released a slew of new images from Rogue One: A Star Wars Story. Many of the cards’ images — revealed on EW and Star Wars News.net — focus on previously unseen characters, including several new X-wing pilots. But the most mysterious image was that of the “Pilgrims on Jedha.” Dressed all in red, with boxy-hoods and eye-slits vaguely reminiscent of the Royal Imperial Guards from Return of the Jedi, these two figures are pursuing some kind of holy quest to gain spiritual guidance on Jedha. While it seems unlikely that these pilgrims will play a huge role in Rogue One, it does speak to the mystical connections of this story, the first major Star Wars film which will — presumably — not feature anyone (other than Darth Vader) who is Jedi.

In A New Hope, Admiral Motti calls Vader’s devotion to the Force an “ancient religion.” While the adjective “ancient” could be read as hyperbolic, it’s also fairly accurate: the Force has been around for a long time and Star Wars has established many times before that it’s important to people other than the Jedi. Essentially, the Force is a religion for “normal” people who can’t necessarily wield its power. And because the public creditability of the Jedi was damaged by the Emperor in Revenge of the Sith, it makes sense that even believing in the Force is somewhat controversial for an average citizen. All of this makes the presence of the planet Jedha politically interesting in Rogue One. If the Empire is all about repression of freedom, then freedom of religion seems at stake, too. In the old Star Wars films, numerous characters fighting for the Rebellion (like Admiral Ackbar) say “May the Force Be With Us.” Meanwhile, we don’t hear anyone who works for the Empire express similarly spiritual sentiments.

The Rebellion then, is somewhat connected to faith, or at least the preservation of faith, whereas the Empire (like the Nazis) is atheistic to the point of intolerance. This isn’t to say there aren’t non-believers fighting for the Rebellion (there obviously are), just that there appears to some mixed-faiths here, whereas the Empire has none.

In The Force Awakens, Lor San Tekka (Max Von Sydow) is part of something called “The Church of the Force.” This fact combined with the planet Jedha in Rogue One and these newly glimpsed pilgrims in Rogue One each add more layers of spiritual textualism to the Star Wars universe. The planet Jedha is supposedly rich in kyber crystals, which ordinarily power lightsabers. And if rumors are true, the Empire is using kyber crystals to create the superlaser which puts the “Death” in Death Star. Seen from a certain perspective, the Empire co-opting Jedi artifacts for use in the construction of a weapon is kind of like the Nazis trying harness the power of the Ark of the Covenant in Raiders of the Lost Ark. Does that make Jyn and her group of freedom fighters like Indiana Jones, Marion Ravenwood, and Sallah? We can only hope.