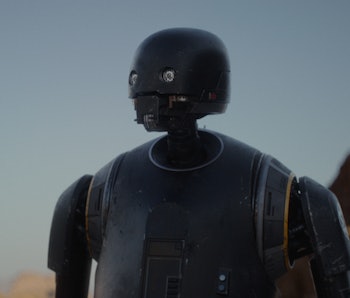 We knew he was no C-3PO, but it looks like K-2SO might actually be the meanest droid in the history of the series. Blame the faulty Imperial programming.

Since “Rogue Friday,” the worldwide Hasbro event on September 30 that marked the release of the latest deluge of toys for the upcoming standalone Star Wars movie Rogue One, action figures of actor Alan Tudyk’s character, the reprogrammed Imperial security droid K-2SO, have been the company’s highest sellers.

“K-2SO seems to be head and shoulders, literally, above everyone else in terms of popularity,” said Steve Evans, design director for Hasbro’s Star Wars line, during a panel at New York Comic Con in early October. A Hasbro rep also told CNBC, “Following in the footsteps of R2-D2 and BB-8, we expect K-2SO to be a new favorite among fans. Droids play an important role in the Star Wars universe and it is our goal to create toys that allow fans to feel like they are immersed in the story themselves.”

It’s true. BB-8 was the immediate breakout hit when the toy line for The Force Awakens dropped in 2015, and the dynamic duo of Artoo and Threepio were the only characters to appear in every Star Wars movie until Rogue One came along to muck that up. But now we have Kaytoo, a character who mixes the attitude of Artoo and the detached British butler schtick from Threepio.

The dry, curmudgeonly humor from his moments in the Rogue One trailers have been the bright spots of humor in the otherwise serious clips, and that will most likely translate to the events in the movie as well.

Thanks to Tudyk, a robot telling humans that they’ll probably die (“There is a 97.6 percent chance of failure”) or won’t (“The captain says you are a friend. I will not kill you.”) can actually be funny, if not a little inconsiderate.