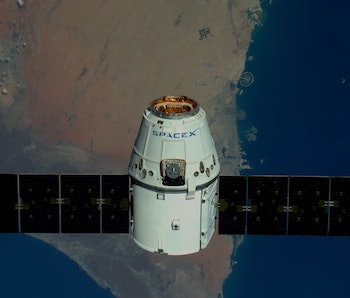 The next generation may indeed be the “space generation,” but spaceflight is still prohibitively costly for all but the richest countries and companies. Discussions during the White House Frontiers Conference, held in Pittsburgh on Thursday, emphasized that if we intend to create a sustainable future in space, we need to make it actually affordable for people to reach the final frontier.

American entrepreneurs are leading that charge. Through government partnerships, private industry is working to significantly reduce the cost of spaceflight, ensuring more people can reach the stars. Here’s a look at three ways private companies are changing the way we access space.

“One of the core problems in space is the cost of transportation,” Tim Hughes, SpaceX Senior Vice President, said at the conference. “SpaceX is addressing this issue by working to create reusable rockets.”

Historically, rockets were lost in orbit after launch. However, that’s no longer the case. Companies like Blue Origin and SpaceX have been working towards reusability. SpaceX CEO, Elon Musk, has said that recovering the rocket’s first stage, refurbishing it, and then re-flying it, could reduce the cost by as much as a factor of 100.

“By improving the reliability and cost of access to space, we can enable bigger things to happen,” Hughes explained.

Mike Gold, the vice president of Space Systems/Loral — a satellite manufacturer and pioneer in the fields of space systems and robotics — is also a fan of recycling rockets. But with a twist: While SpaceX is working towards reusing the first stage, he and others are focusing on the upper stage. “We want to reuse the second stage and turn it into a habitat,” explained Gold. “If we do that, then every time we launch into space we can be creating real estate, while lowering costs.”

The idea is to start with an Atlas V rocket, and transform the upper stage (aka the Centaur), into a habitat after you reach orbit. To do this, the team proposes adding a docking hatch to the Centaur, and then topping it off with a Cygnus spacecraft — the same one that currently makes supply runs to the ISS. Once in orbit, it can dock with the space station, where crews could then begin the process of converting it into a new hab.

Satellites and other spacecraft have a limited lifespan. When one breaks down or runs out of fuel, they are abandoned in orbit, resulting in a lot of space junk.

But what if we didn’t have to replace satellites, what if we could repair them on orbit? That’s what NASA hopes to do.

“No longer are we going to just deploy a satellite, where we build it on Earth, launch it and then throw it away.” Gold explained during the panel. “From now on, we’re going to restore, refuel, refurbish these systems.”

NASA’s Restore-L mission is a satellite-servicing mission set to launch in 2020. By using technology tested on the International Space Station that tracks how vehicles approach and dock with the station, the new spacecraft will rendezvous with and refuel the aging remote-sensing satellite, Landsat 7.

One of NASA’s commercial partners, Orbital ATK, has a different type of servicing mission planned for 2018. Its Mission Extension Vehicle (MEV) will be able to dock with satellites in orbit, allowing the MEV to adjust an older satellite’s orbit, or move a satellite into a completely different orbit — either because an anomaly caused it to launch to the wrong location, or because it’s getting a new assignment).

“Eventually we’re just going to have persistent platforms in orbit where you can build satellites in orbit,” Gold said, “and this is going to change everything.”