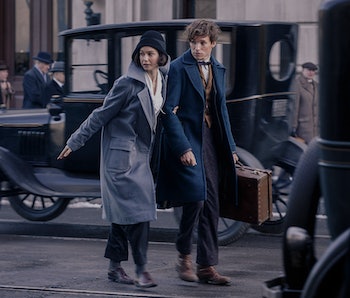 Newt Scamander’s magizoologist adventures will extend well beyond Fantastic Beasts and Where to Find Them. The series was originally planned as a trilogy, but it turns out now Newt’s antics will extend across five films, covering a large swath of previously unknown wizarding history.

During a global livestream event on October 13, Harry Potter author J.K. Rowling stated “…we’re pretty sure it’s going to be five movies.” Saying a “trilogy” was just a “placeholder,” Rowling’s announcement assured fans that the stories of the wizarding world are far from over.

Set in 1926, Fantastic Beats and Where to Find Them takes place nearly 70 years before the events of the Harry Potter novels, the bulk of which actually occur in the 1990’s. Rowling’s new promise for a five-part film series suggests that Fantastic Beasts and Where to Find Them could suddenly become much more than simply a backstory for Harry Potter, but instead, an off-shoot series of tales with their own sets of conflicts and consequences.

Still, because these stories take place in the past of the Potterverse, that does mean we will see beloved characters and situations from the familar Harry Potter stories referenced. When asked what was in store for the protagonist of Fantastic Beasts, Newt Scamander, Rowling said: “We do talk about Dumbledore and Grindelwald.”

We’d already been aware that the dark wizard Grindelwald would be referenced in the new film, but now, with the prospect of a huge film series looming, it seems like we’ll see young versions of both Grindelwald and … the most powerful wizard of all time: Albus Percival Wulfric Brian Dumbledore! Start your dream casting lists now.

Fantastic Beasts and Where to Find Them opens November 18.

More like this
Entertainment
6.21.2022 1:00 AM
Game of Thrones sequel could ruin the best part of the series finale
By Alex Welch
Entertainment
6.19.2022 11:30 AM
You need to watch the best monster thriller of the '90s before it leaves HBO Max next week
By Mónica Marie Zorrilla
Entertainment
6.23.2022 7:00 AM
The Boys Season 3 Episode 6 release date, time, plot, cast, and trailer for “Herogasm”
By Jeff Spry
Share: