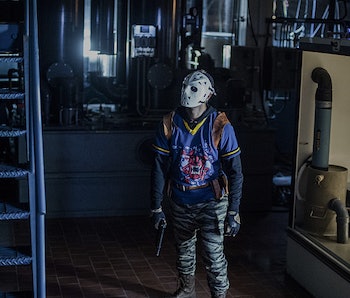 After a long, terrible Season 4, Arrow is being revitalized with youthful vigor. Its newest characters — Wild Dog, Ragman, Artemis (yet to be formally named), and Mister Terrific (him too) — are DC D-listers who have injected much-needed fresh air into the stuffy and stale Arrow. It’s almost as if to survive, Arrow wiped clean the Green Arrow mythos save for Oliver himself.

Arrow began in 2012 as a solo series in the vein of Batman Begins and Frank Miller’s Batman: Year One. Of course there was a Green Arrow: Year One, but it’s story of Oliver Queen (Stephen Amell) fighting to survive on a remote island that was told through flashbacks instead of at the present. It seemed for a long time that the Arrow would fight solo, until Season 2 introduced Black Canary (Caity Lotz) and Arsenal (Colton Haynes), both enduring elements in the Green Arrow comics. Sure, Ollie wasn’t always alone, considering his pal Diggle (John Ramsey) on the field and Felicity (Emily Bett Rickards) his hacker, eyes, and ears, but in the mask and cowl business? Ollie was on his own … until he wasn’t.

Season 4, which had this iteration of Team Arrow at their most comics-accurate — Laurel Lance took over as Black Canary after Sara died — was also a troubled one. On top of poor plotting and characters who constantly contradicted themselves, there was the odd shift into the supernatural that didn’t fit the grounded environment Arrow spent years building. (Aside from the Lazarus Pit, the Season 3 antagonist Ra’s al Ghul was really just a normal guy with exceptional combat skills.) Season 4 was Arrow at its most familiar, but it didn’t have an identity.

Season 5 isn’t a reboot, but it might as well be. The series continues Oliver’s political career from last seasons, but the show has removed the supernatural stuff except for some dude named Ragman, Ollie’s newest ally in the new Team Arrow; I think he has magical rags. or something The whole team is new; Diggle is having his own problems in the army while Thea tries to have a normal life, even if she can’t help but perch on rooftops overhearing conversations once in awhile.

Ragman, Wild Dog, Artemis, and Mister Terrific all bring something new while feeling familiar. Artemis, the eventual identity of Evelyn Sharp, is basically Black Canary-Lite, a younger and more inexperienced vigilante than her predecessor. Curtis as Mister Terrific is Felicity if Felicity bothered to get her hands dirty, while Rene Ramirez, aka Wild Dog, is not only the X-factor but also an echo of Oliver’s younger, brasher self. In this week’s episode, “The Recruits,” Rene was the only one who thought on his feet and obtained evidence even if it was against the Green Arrow’s commands. That sounds a lot like a certain Emerald Archer.

Ragman is by far the biggest question mark. The only one with any kind of magical ability, Ragman could be the team’s greatest asset or their greatest liability. A civilian who survived the bomb in Havenrock, Ragman offers the most direction for the series going forward. He’s unlike anything seen in Arrow before, and for that alone, Arrow has presented a mystery worth tuning in to follow.

Diggle is going to return — trailers for Season 5 show him training with the new recruits — and Thea isn’t really going anywhere. But the new heroes in the team offer new dynamics for Oliver and Felicity to bounce off of. Hardly any of these characters have been in Green Arrow comics — Wild Dog is only being included now, but as a gang in Benjamin Percy’s ongoing series — and he’s become exactly what the CW’s Arrow needed.