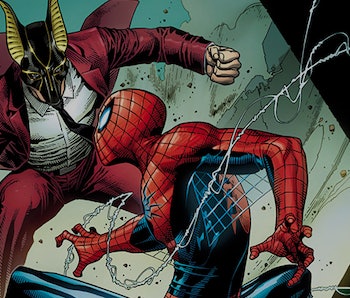 Who knew a Spider-Man comic would turn out to be one of the creepiest of the year? Dan Slott’s take on another new Spider-Man clone story kicked off today with The Clone Conspiracy #1. While the first issue does a good job at finally pitting Spider-Man against the Jackal, a fight that’s been building up for the last couple issues of The Amazing Spider-Man, Slott’s “Mad Scientist” tropes finally come to a head in a terrifically creepy first issue.

Since The Amazing Spider-Man #16, Peter Parker has been gathering intel on a San Francisco-based medical lab called New U. Unbeknownst to Spider-Man at the time, the lab was run by Jackal — a mad scientist who has a slight obsession with cloning Peter Parker and his loved ones. Seriously, this clone story has played out a lot of time in the past, each time involving the Jackal in some way.

What’s unique about Slott’s take is that he’s been infusing some Mad Scientist vibes from films like Reanimator and The Fly into the story leading up to his Clone Conspiracy debut. This all comes to a head when Parker finds this deliriously mad sight in the New U lab.

I don’t want to spoil the rest of the book for you, but regardless of how The Clone Conspiracy ends up by the finale, Slott and artist Jim Cheung deserve all the credit for the creepiest superhero panel in October (so far).

The Clone Conspiracy involves the reemerged Jackal using his new “reanimation” technology to bring back enemies and loved ones related to Peter Parker. A few classic villains have come from back from the dead, along with a few new ones who were created from the Jackal’s new process.

The first issue of The Clone Conspiracy is available now in comic book stores and Marvel’s online store.