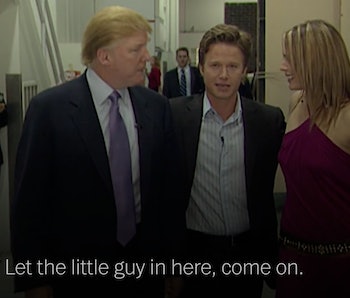 At this point in the election cycle, Donald Trump has said too many abhorrent things for any reasonable person to keep track. But the recently leaked audio of his 2005 “locker room” conversation with Billy Bush is unforgettable. Aside from further illustrating Trump’s lack of respect for women, the conversation raised questions about Bush, who can be heard egging on Trump in the recording. Bush has been under major scrutiny since the video was released, but it turns out that he’s been a practicing misogynist for quite some time.

Now, people are piling on, which is at it should be.

In a 2002 interview with Jennifer Lopez that recently resurfaced, Bush wastes no time in asking about her butt. “People have raved about it for years,” he says. “How do you feel about your butt?” hurling the off-hand question at her with a boyish emphasis on the word “butt.”

Lopez responds, “Are you kidding me? You did not just ask me that.” To make things even grosser, the segment cuts to footage of Bush saying, “Oh, I did alright. I’m a bad boy” while attempting to give puppy dog eyes to the camera. Lopez tries to laugh it off and eventually resorts to calling over the actor that plays her son in the movie Maid in Manhattan to get Bush to stop asking about her body.

And this interview isn’t an isolated incident. Last Week Tonight edited together a video of Bush’s various other interviews where he’s made lewd comments, including talking about a then-teenager Selena Gomez. He called her “exotic.”

Based on this kind of invasive and sexist question, it’s not shocking Trump found a bro in Bush. The leaked audio is still infuriating, but maybe it isn’t shocking. Maybe it’s just forcing us to look at the elephant swaggering around the room being a total asshole.