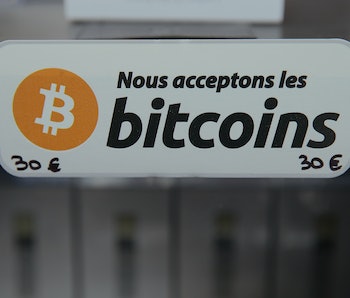 The uber-libertarians who created Bitcoin don’t like banks, and big banks, for the most part, don’t like Bitcoin. Yet, despite this general sense of mutual disdain, many banks are very, very interested in the technology behind Bitcoin (even if they think the actual currency can take a hike).

Huge and important institutions like the Bank of England and the People’s Bank of China have expressed a sincere interest in adopting the blockchain method of recording and completing transactions, and applying themselves, The New York Times reports.

In theory, blockchain technology — which is also known as distributed ledger — could allow these banks to track every cent along every step of its journey for every transaction in real time.

Research by the Bank of England suggests this level of control and accuracy and efficiency could add up to 3 percent to a country’s economic output, and deputy governor of the People’s Bank of China, Fan Yifei, wrote an op-ed in Bloomberg praising the technology.

An IBM report from last month found that 15 percent of big banks will use Blockchain by next year, and the World Economic Forum said that “most” banks would be doing so shortly after that.

There are naysayers, however, including a researcher at the Federal Reserve Bank of St. Louis who told the Times that banks would be better off just updating current technology rather than trying to cash in on the hip new Bitcoin trend. Plus, there’s the inherent contradiction of having a central bank use a distributed ledger.

Still, banks are interested. “Digital currencies have shown considerable promise,” Yifei wrote in Bloomberg. “Research by the People’s Bank of China suggests that the best way to take advantage of these innovations is for central banks to take the lead, both in supervising private digital currencies and in developing digital legal tender of their own.”

Looks like Bitcoin is going to go mainstream — or at least a bit of it, anyway.

More like this
Innovation
6.24.2022 5:00 AM
Beam-steering radio technology could help autonomous cars finally hit the road
By Sascha Brodsky
Innovation
6.25.2022 10:00 AM
9 veggies that are healthier cooked than raw
By Laura Brown and The Conversation
Innovation
6.21.2022 11:00 AM
No, Google’s Deepmind isn’t on the verge of human-like reasoning
By Tristan Greene and Undark
Related Tags
Share: