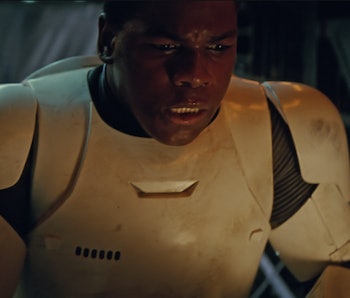 At the end of Star Wars: The Force Awakens, the severity of Finn’s injuries from his lightsaber duel with Kylo Ren were unclear, but it looks like he’ll have a speedy recovery all thanks to a special dip in some goo very familiar to Luke Skywalker: bacta!

According to an unverified plot leak on Making Star Wars, the following scene will occur sometime at the start of Episode VIII:

“Medical staff have now placed Finn in a bubble suit (to elaborate, we have it on good authority it is called a bacta suit), to heal his injuries.”

In The Empire Strikes Back, Luke Skywalker recovered from his wounds at the paws of the dreaded Wampa snow creature by being put in a “bacta tank.” In larger Star Wars lore, bacta is gelatinous substance which Wookiepedia defines as having “magical healing properties.” In a Rogue Squadron novel by Michael Stackpole called The Bacta War, the machinations of the Rebels figuring out how to stockpile and control the substance is extensively explored.

Basically, the military organizations in all of Star Wars — from the Rebellion to the Empire to the Resistance and the First Order — all rely heavily on a substance which allows people to be rejuvenated faster than they would be normally. While bacta cannot regrow limbs for you (obviously the robot-hand market is an important part of the Star Wars economy) it does get you back on your feet way faster than anything we’ve got on our planet. It’s like Neosporin + steroids x 1000.

Because 30 years have passed between Return of the Jedi and The Force Awakens, it makes sense that the big, bulky bacta tank seen in Luke’s time would be replaced by a sleeker “bacta suit.” Even though this is only a rumor, the idea we’ll see Finn made “better than ever” by bacta makes total sense and connects one of the heroes of the new trilogy neatly with Luke Skywalker.