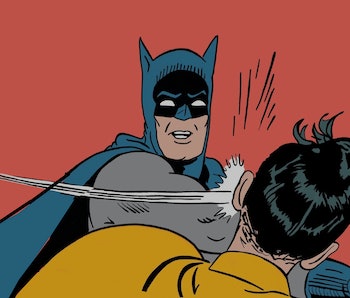 Now this is how you apologize: When DC announced yet another reset of its entire comic book universe last year, fans and critics were understandably skeptical of Rebirth. After all, 2011’s New 52 overhaul had infamously changed many fan-favorite characters and storylines, and new readers proclaimed the publisher’s lightning quick schedule both sloppy and seemingly random.

However, Rebirth has proved a stunning success, and DC has been leading comics sales, beating out Marvel’s Civil War II, since the movement began. Dan DiDio and Jim Lee, DC’s head publishers, spoke with Inverse at New York Comic Con and admitted that New 52’s failure is part of what makes Rebirth great.

“Our core Rebirth material — these are the books that have to work,” DiDio says. “When Batman books work as well as they do, that allows us to make creative risks, like Young Animal or Scooby Apocalypse.” Both DiDio and Lee insist that DC’s entire plan isn’t limited to its Rebirth books, and they remind readers to check out experimental series like the ones coming from DC’s Vertigo. DC earned the wiggle room necessary to experiment, DiDio and Lee say, by fixing New 52’s strategic missteps through Rebirth.

“The success of Rebirth gave us the air cover, or the freedom, to slow down a bit. Our second wave is just three books, just Batwoman, Super Sons, and Justice League of America,” says Lee. “We now know you don’t have to rush it. You don’t to fill the void with books that are on the tipping point of being cancelled. We have the freedom to make sure we’re not diluting the brand.” That phrase in particular seems important to both DiDio and Lee, who assumedly decided that New 52’s primary mistake was “diluting the brand.” DiDio used it again when describing how DC characters co-exist in films and comics.

DiDio also says they’re making decisions on the fly, based on Rebirth’s astounding commercial success. “Our second wave was going to be twice the size that it will be. In hindsight, we realized there wasn’t any urgency to put extra books in stores. We’ve created something very valuable with Rebirth, so we’re protective of what we roll out now. One of the lessons we learned from New 52 was that we pulled the trigger too hard and didn’t let books find their audiences.” DiDio is referring to the vast numbers of cancellations DC saw in the years following New 52’s launch, including Starfire, Midnighters, and Black Canary.

“We made dramatic changes to characters and ideas, and ultimately we didn’t get a quick enough response and we dropped those books too quickly,” DiDio says. “Maybe what’s better is someone like Batwoman; she’s doing well in Detective, so her new solo series seems natural. We give her room to show herself off after having been portrayed so well in another series.” Overall, Didio says, “We’re being more judicious and more nurturing with these characters.”

Employing a deep respect for DC’s existing characters feels in line with Geoff Johns’s plan for DC’s upcoming films, and that connection is logical because Johns worked closely with DiDio and Lee before turning his attention to the company’s films. DiDio and Lee maintain that though Rebirth is a renewal, it’s informed by DC’s legacy in a way that a reboot like New 52 wasn’t. “Showcasing a character in a successful series before giving them a solo run … that’s the way I remember comics moving,” DiDio says. He seems confident that a classic publishing strategy will capture and maintain the focus of younger readers, and DC’s high sales numbers seem to support him.

More like this
Entertainment
6.29.2022 4:01 PM
Harley Quinn Season 3 could fix a major Batman controversy, trailer hints
By Eric Francisco
Entertainment
6.24.2022 11:15 AM
Behind the scenes at “Herogasm,” The Boys’ most NSFW episode ever
By Aaron Pruner and Jake Kleinman
Entertainment
6.27.2022 1:30 PM
17 years ago, DC copied Marvel — and told the worst Batman story ever
By Richard Newby
Related Tags
Share: