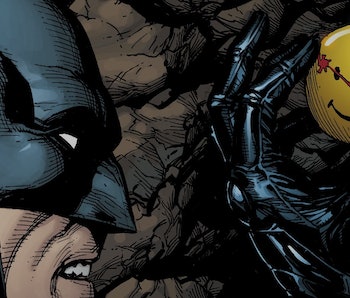 In the most recent issue of Detective Comics, longtime Robin, Tim Drake, was killed in a drone strike — until he wasn’t. Kidnapped and transported to some kind of separate pocket dimension, Drake is being held by a mysterious figure who only identifies as Mr. Oz. Eagle-eyed fans who have been expecting the coming of the Watchmen since DC Rebirth suspect that Mr. Oz is none other than Ozymandias. This begs the question, how far will the Watchmen go in fixing the DC universe?

When Geoff Johns rebooted the DC universe with DC Rebirth, the mission was clear: the DC universe was too messed up to be enjoyable so it needed to be fixed. The solution? Blame it all on the Watchmen, whose reveal at the end of DC Universe Rebirth #1 sent shockwaves across the comic book fandom. The Watchmen were officially a part of the DC universe, and they would explain why DC comics have been so dramatically different the last few years.

Nobody’s really sure how the Watchmen will be revealed to the rest of the DC Comics Universe, only that their presence looms in the backgrounds of heroes like Superman and Batman. Now, with Dr. Manhattan and Ozymandias as known agents within the universe, nobody is quite sure what the endgame is for Rebirth.

So far Mr. Oz has been focusing on Superman, capturing Doomsday and revealing that he might have had a hand in creating the New 52 Superman and Lois Lane. The famous couple famously weren’t romantically entangled in that universe. Now Mr. Oz seems to have shifted to Batman by capturing Tim Drake right before Drake was killed.

The Watchmen’s plans are still securely under wraps, but after Batman’s emotional response to Tim Drake’s “death,” there’s no way he won’t be doing everything in his power to get Tim back. This could put Batman on the warpath that would put him directly against a possible Watchmen, who remember has Doomsday under lock. Could Drake become the catalyst that pits the Watchmen against the Justice League? Whose side is anyone even on? Will the Watchmen continue breaking the 4th Wall or will they keep leaning on it to save characters from death and tragedy? Whatever it is, DC Rebirth is still a big, interesting mystery.

More like this
Entertainment
3 hours ago
Why Moon Knight’s head writer refused to “go toe to toe” with Batman
By Eric Francisco
Gaming
22 hours ago
MultiVersus could be the first Smash clone to truly challenge the throne
By Eric Francisco
Gaming
5.10.2022 4:14 PM
Everything you need to know about the next big Batman game, Gotham Knights
By Joseph Yaden
Related Tags
Share: