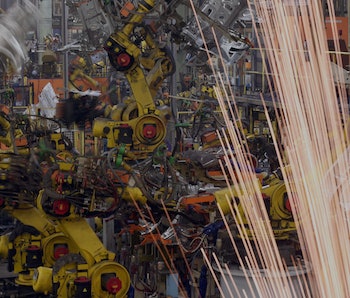 Robots are taking over factories, and now even the people who write the software on which these automated workers rely have to worry about being replaced: If a recent partnership between the Fanuc robotics company and Nvidia bears fruit, these robots will soon begin to program themselves with minimal supervision.

Fanuc announced on Wednesday that it plans to use Nvidia’s graphics processing units (GPUs) to power an artificial intelligence platform that will allow factory robots to learn from each other. This means that they’ll be able to adapt to new processes faster than ever.

It also means the people who program these robots might have to worry about their jobs. Robots have steadily taken over factory jobs, allowing companies to automate even complex tasks instead of relying on human workers. Programmers were safe because the software was complicated, needed to be rewritten when something changed in the manufacturing process, and required technical skills.

Now, in addition to replacing humans on the factory floor, these robots will be less dependent on programmers. They’re learning faster than ever — and they’ll continue to get smarter as more progress is made in A.I. and the technologies that power it.

This is a prime example of how robots can disrupt the economy. It was previously thought that they would only replace blue collar workers — those performing physical tasks — and would leave white collar workers unscathed. But now, between A.I. that allows robots to program themselves and an A.I. reporter, it’s clear that it’s not as cut-and-dry as people expected.

People who rely on factories, no matter what their roles are, will soon have to figure out how to survive. One possible solution is a universal basic income that will allow people to afford to live even if robots take their jobs. As these robots continue to teach themselves new tricks, that solution might become increasingly attractive no matter what color someone’s collar is.

More like this
Innovation
6.21.2022 11:00 AM
No, Google’s Deepmind isn’t on the verge of human-like reasoning
By Tristan Greene and Undark
Innovation
7.1.2022 10:00 AM
Robots are ready to get touchy-feely
By Sarah Wells
Entertainment
6.28.2022 12:00 PM
Westworld Season 4 theory may reveal a shocking Dolores twist
By Mónica Marie Zorrilla
Related Tags
Share: