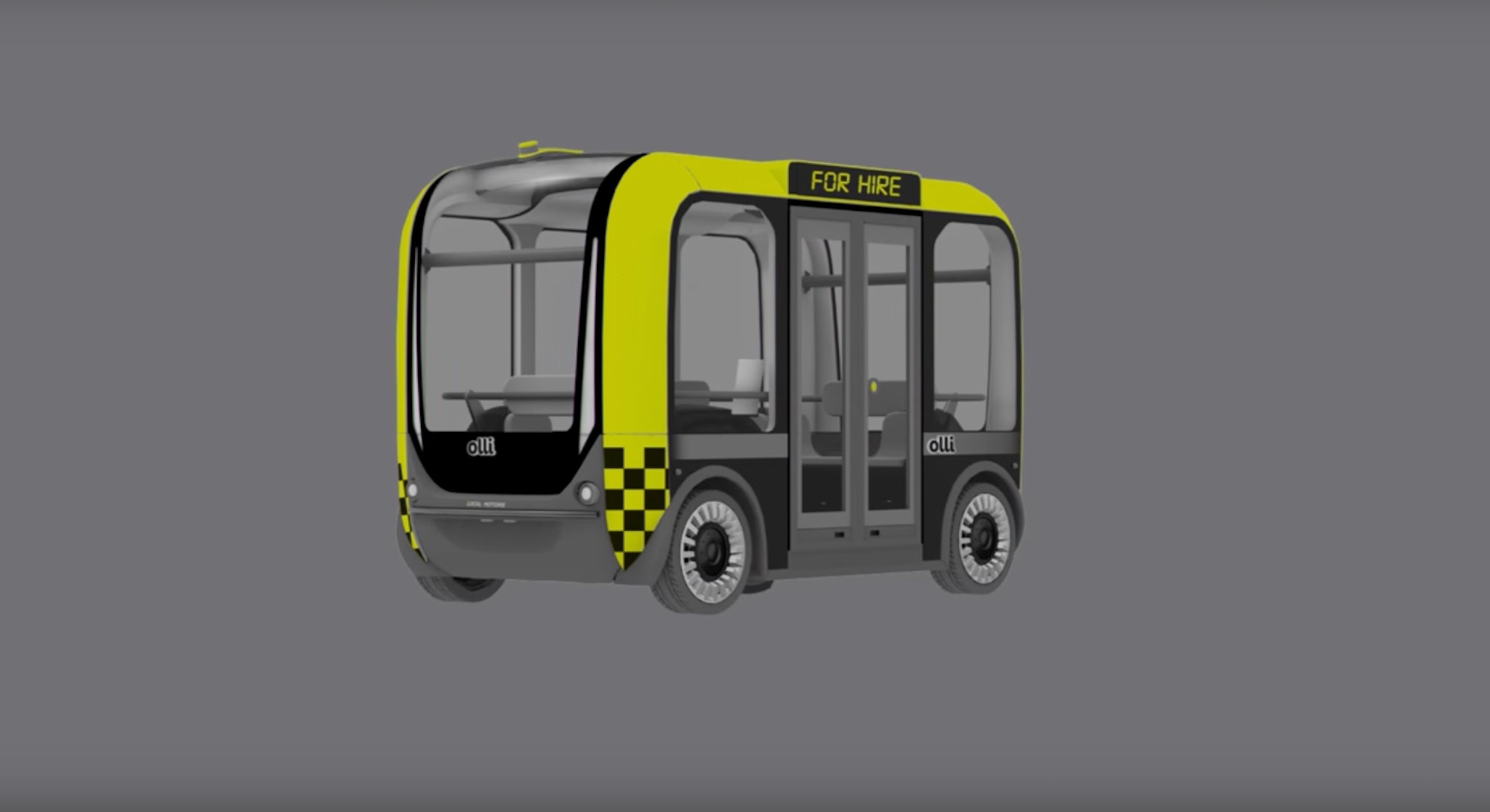 It’s only a matter of time until autonomous vehicles dominate America’s roads. Uber’s already testing self-driving cars, Ford is trying to finish them by 2021. And then there’s Tesla Autopilot, of course.

New federal guidelines for self-driving vehicles were released in September, and President Barack Obama has come out in support of the shift to autonomous cars. California is even allowing companies to start testing fully autonomous vehicles without steering wheels, brake pedals, or accelerators.

But while much of the focus has been on personal vehicles, public transit is more than likely going to be where we see it adopted sooner.

Local Motors project manager Jonathan Garrett, who is a lead on the company’s self-driving bus project called Olli, to find out why that’s going to be the case.

What was the impetus for Olli?

We’re designing a vehicle that, for instance, could transport people during the day and tackle logistics or surveillance at night.

What are the greatest potential benefits for autonomous vehicles?

There are a ton of promises associated with autonomous vehicles. When you’re talking safety it means reduced accidents. Autonomy could also mean a higher number of miles travelled by one vehicle so you have fewer vehicles sitting stagnant. There are pollution concerns too — an electric vehicle isn’t emitting the same pollutants as traditional vehicles — but autonomy’s biggest impact will be safety because the vehicle doesn’t get distracted or drink and drive, for example.

How does the increased safety of autonomous vehicles apply to public transit?

Olli isn’t necessarily competing with public transit. It can really augment existing infrastructures. It’s a “first-last mile” solution, which means that it can bring people to larger transportation hubs, so it can increase ridership there. “First last mile” is transportation jargon. It refers to that distance where walking might take too long but driving is also a little bit absurd because it’s so close. Anywhere from one to three miles is usually referred to as a “first-last-mile issue” in the industry.

One of the reasons we’re tackling a low-speed, shared-use vehicle is because it’s easier to deploy. Being classified as a low-speed vehicle means you don’t have to meet certain regulatory requirements and you can operate much more easily on private campuses. So you’re going to see it in environments like that.

A lot of countries where this is developing, they don’t have an amazing transportation infrastructure like the United States does. In places like Singapore, where many households don’t have cars, shared mobility is the answer. For them, buying a personally-owned vehicle was not an option and it’s not really the norm like it is in the United States and parts of Europe. Shared mobility is also the answer to having a significant impact on reducing pollution, congestion, and getting unused vehicles off the road and out of parking lots. People here in the United States might be a bit cautious to give up a personally owned vehicle, but when they understand the benefits in terms of saving time and money and the responsibility of car ownership, I think it will really gain traction quickly.

Have you come across what appears to be this discrepancy of Americans seeing cars as symbols of freedom while a lot of the population lives in places where public transit is the norm?

If you speak with people who live in cities where public transportation is the norm, they really value the productive time they can have on a bus or train. They can read, catch up on work, talk to friends, play games, etc. and that is a massive symbol of freedom in certain cites in the United States. It really just depends on how you define “freedom.”

Public transportation and autonomous vehicles will be able to give on-demand point-to-point mobility just like personally owned vehicles do now. That’s really the pinnacle of freedom: Being able to get where you want to go when you need to be there, but also being able to be productive while doing it — rather than having to focus on driving a vehicle. It’s going to be a paradigm shift.

Will we see a bunch of self-driving vehicles in cities, while rural areas still see traditional vehicles?

There are going to be so many different forms of autonomous vehicles you can have in rural areas or smaller towns that they’ll still be useful. There could be small fleets that are co-opted by communities, for instance, and they could be checked out and used for various activities. There could be more long-haul types of autonomous vehicles where you need to get to a town or a city two or three hours away. And then when you’re talking about a dense urban core there will be an application for that as well, where you could almost hail it like a taxi today.

It’s been extremely positive so far. We just launched our two prototypes in June. We’ve had one in National Harbor and one in Berlin, and for the entire four-month period we’ve been at various shows and demos. We haven’t even had a ton of time to circulate the vehicles with real riders yet because there’s been so much interest in having demos and events. We’re interested in building the next four-to-six units so we can get legitimate pilot programs going. We’re in contact with a ton of different municipalities across the U.S. and Europe, and we’d like to install some of those programs by the middle of next year, at the latest.

A lot of people don’t currently trust autonomous vehicles. Are platforms like Olli preparing the public for self-driving vehicles?

It’s great that [the National Highway Traffic Safety Administration] has recognized the need for guidelines, and that’s really going to help developers and manufacturers. As far as studies showing that people wouldn’t trust this type of technology, once they see it in person they completely forgot what they told the interviewer. It’s really interesting to see them be completely delighted and not at all afraid of stepping onto a self-driving vehicle. They have tons of questions and interest, and they really just want to see vehicles like this deployed for real.

Many people are worried about the cybersecurity of autonomous vehicles. What’s the relationship between the two?

That’s always going to be a concern. One of the strategies we’re working on is having all safety-critical functions of the robotics system local, so there would be no cloud communication for that particular logic. We’re also working with IBM on the user experience. That would be connected to the IBM cloud, but it would not interface with any of the robotics-safety chain. So it’s keeping the systems redundant and separate — that’s what will make it safe from cyber attacks.

Is there a future in which all or most vehicles are driving themselves?

I hope so. I think it would be a lot safer and efficient. It would open up mobility to a much larger group of people who have very poor access to current transportation infrastructure or who can’t afford a vehicle. It would do great for aging populations and disabled populations. I think the impact is going to be huge — it would really democratize transportation. It would personalize it, too, because there’s so much artificial intelligence that it will feel like an extension of your iPhone, for instance.

How far are we away from that future?

Within the next five years you will have seen a pretty good majority of the United States having had some encounter with autonomous vehicles. But when we’re talking about replacing significant numbers of personally owned vehicles, or non-autonomous vehicles from the road, that could be a decade-plus before the numbers are meaningful at all.

How are we going to get there from where we are today?

The importance of low-speed, “first-last mile” has been overlooked. A lot of companies now — whether they’re a manufacturer or a software designer — are really focused on SAE level 5 autonomous vehicles that have full-vehicle control in all domains. That really is the holy grail, and what would replace all the vehicles on the road today. But Level 4, which is full vehicle control in specialized domains, is something we can do now. That can be very impactful on private campuses and urban centers. It can really speed up adoption and spread awareness for autonomous vehicles, and that’s our strategy for deployment.