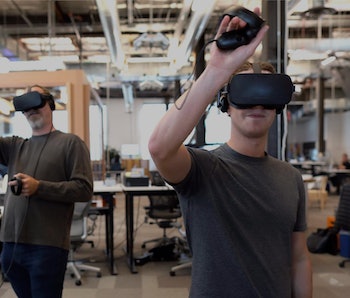 Facebook CEO Mark Zuckerberg took the stage at Oculus Connect 3 on Thursday to assure the audience that Touch, the futuristic controllers designed to work with the Oculus Rift virtual reality headset, will be released later this year.

Oculus CEO Brendan Iribe said later at the event that Touch will cost $199 and is expected to start shipping “in volume” on December 6. Pre-ordering for the device will open on October 10.

Touch is a pair of controllers that use “constellation tracking” to track its wearer’s movement and translate it into near-identical movements in VR. The control system was supposed to debut in 2015, but it was delayed at the last minute and given a tentative release window of “the second half of 2016” so the Oculus team could refine its hardware and make it “more comfortable, reliable, and natural.”

The Touch delay was followed by delays in delivering the Oculus Rift headset due to supply issues. Oculus hired a new chief operating officer to solve these problems, but there was no word on Touch.

While developers and consumers alike have waited for Touch to debut, companies like Leap Motion have been working to make interactions with virtual objects more realistic. Dexmo even revealed a glove that would let people feel virtual objects as if they were really in their hands.

More like this
Innovation
6.27.2022 8:00 PM
Artificial photosynthesis can grow plants without light — and may solve a planetary dilemma
By Steph Lee
Innovation
13 hours ago
Robots are ready to get touchy-feely
By Sarah Wells
Innovation
6.29.2022 6:00 PM
Can cars run on water? The science of a TikTok conspiracy theory, explained
By Andrew Moseman
Share: