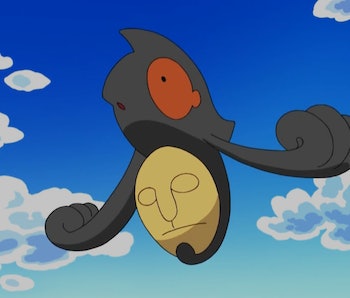 Gather ‘round my imaginary campfire, dear readers. It’s time to tell some spooky stories. Spooky Pokémon stories. Sure, Pokémon as a concept is cute and cuddly — just look at poster child Pikachu. He’s the epitome of cute tied up into one compact, electrically charged parcel. But many Pokémon have a dark side, and still some others have a Dark side (type).

Oh yes, believe me, Pokémon has gone to some dark places in the past. Come with me on this journey, as we take a look at some of the spookiest critters Game Freak’s disturbed minds have churned up.

Drowzee wears its creepiness loud and proud, but what lies beneath is actually a lot more terrifying. Don’t take my word for it, check out its Pokédex entry from Pokémon Ruby and Sapphire:

If your nose becomes itchy while you are sleeping, it’s a sure sign that one of these Pokémon is standing above your pillow and trying to eat your dream through your nostrils.

That’s right, let that mental picture settle in. Drowzee eats your dreams right out of your sniffer. No. Thank. You.

At first glance, Yamask doesnt look so bad. A little weird, sure, but that’s the norm for most Pokémon after Generation III. But now it’s time for the true test. Lets see what our trusty guide, the Pokédex has to say:

Each of them carries a mask that used to be its face when it was human. Sometimes they look at it and cry.

O…ohhh. Sometimes the anime holds back on the scary, but not this time. In the episode A Night in the Nacrene City Museum! a Yamask starts tearing the museum apart after its mask is mistakenly put on display. Meanwhile the expressionless mask literally weeps in its glass case.

A cursed energy permeated the stuffing of a discarded and forgotten plush doll, giving it new life as Banette. The Pokémon’s energy would escape if it were to ever open its mouth.

Nope, nope, nope. It has a zipper strategically sewn over its mouth to prevent its life force escaping, which is important, I guess, because Banette is usually very busy haunting dumpsters and trash heaps. It does this, you see, in the hopes of hunting down the child who abandoned it. That not bad enough for you? Banette also stabs itself with pins to place curses on its victims.

Aww, check out this cute little bouncing piggy. What could possibly be wrong with this one?

Spoink bounces around on its tail. The shock of its bouncing makes its heart pump. As a result, this Pokémon cannot afford to stop bouncing — if it stops, its heart will stop.

Spoink’s very existence is horrific. It lives a life of endless, exhausting suffering, for if it stops, it will die. What if it breaks its spring? What if it falls over? You can’t even cuddle with those adorable pudgy cheeks, because if you do, you’re committing murder. What sort of evolutionary joke is this? Perhaps Spoink is the result of some failed crossbreeding experiment between a pig and a Zoombini. All I can think of is that one episode of The Simpsons when the kids try to turn frogs into princes and Bart’s goes horribly wrong:

First appearing in Generation I, Kadabra and its evolved form, Alakazam, are still highly popular, super-powerful additions to any Pokémon team. Now, allow me to ruin that for you with this Pokédex entry from Pokémon FireRed:

>It happened one morning — a boy with extrasensory powers awoke in bed transformed into Kadabra.

You read that right — in the fiction of Pokémon FireRed, word is that Kadabra doesn’t evolve from a cute teleport-happy Abra. Instead, children with ESP live in constant fear that one day they might awaken as a mustachioed monster. Sweet dreams.

Phantump is pretty cute as far as ghost Pokémon go, but don’t let that fool you:

>According to old tales, these Pokémon are stumps possessed by the spirits of children who died while lost in the forest.

What’s that? Animated tree stumps possessed by the spirits of children who died horribly alone in the forest aren’t scary enough? Phantump’s have also been known to lead explorers astray by mimicking children’s voices. What Phantump has planned once it gets people good and lost is anybody’s guess, but we’re betting — whatever it is — it’s sinister.

This spooky ghost likes to hang out around hospitals waiting for people to die so it can snatch up their spirits and burn them for fuel. Imagine seeing this Pokémon floating by your bedside, just out of reach, staring at you with its expressionless yellow eyes. Lampent’s evolved form, Chandelure is just as bad:

>The spirits burned up in its ominous flame lose their way and wander this world forever.

Once your soul has been taken by one of these beasties, there’s no hope left for you. Your immortal soul meanders about listlessly, unable to find peace. What a lovely little pocket monster.

… Having come out the other side, I think it’s safe to say that we’ll never look at Pokémon the same way again. We made it though, and for that we deserve a palate cleanser. Consider this touching image of Pikachu and Eevee our parting gift to you.