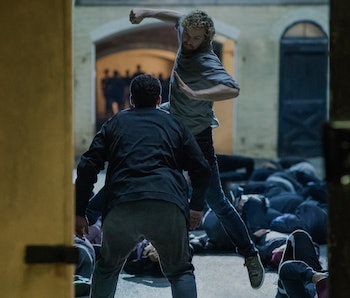 The comic book giant and lifestyle brand revealed that its fourth streaming series will be uploaded to Netflix on March 17, 2017. It will mark the final piece in the puzzle that leads to a mini-series featuring its street-level superhero team, the Defenders.

The announcement comes on the heels of the Friday release of Luke Cage — the company’s third series — which is by all qualitative measures a massive hit. That series was a spin-off of Jessica Jones, the noir-esque private eye superhero show, which in turn debuted after Daredevil.

The show will star Finn Jones, best known for his work on Game of Thrones. Here’s a first look at him kicking ass in his new role:

Iron First, first introduced in the 1970s, mixes martial arts and mysticism, a clear product of his time, equal parts Doctor Strange and kung fu films. The synopsis and teaser for the show are below:

>Fifteen years after being presumed dead in a plane crash, Danny Rand (Finn Jones) mysteriously returns to New York City determined to reclaim his birthright and family company. However, when a long-destined enemy rises in New York, this living weapon is forced to choose between his family’s legacy and his duties as the Iron Fist.