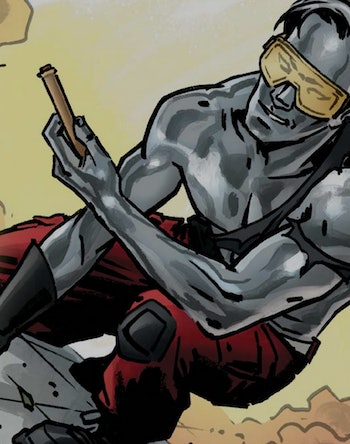 The story starts off conventionally enough for a comic book: A handsome and brilliant young scientist invents an advanced suit of armor, nurses a crush on the girl next door, and harbors a dark secret. But here’s the thing that sets our hero, Samarium, apart from the nearly 10,000 characters already created by Marvel Comics: He’s got inflammatory bowel disease.

Designed for Takeda Pharmaceuticals and the Crohn’s & Colitis Foundation of America, Samarium — mild-mannered Ian by day — was created by Marvel Custom Solutions, the comic book goliath’s in-house branded content unit. Marvel has lent its famed characters to a myriad of campaigns over the years, assisting in marketing pushes for Hostess Fruit Pies and Nancy Reagan’s “Just Say No” campaign against drugs; Custom Solutions takes that real-world market penetration further by creating superheroes designed to appeal to very specific clienteles, including the roughly 1.6 million Americans currently suffering from IBD.

“We’ve seen a huge boom in interest, because more brands are aware of the characters and feel connections to the characters,” Jon Ennis, Marvel’s Director of Business Development, Partnerships, told Inverse. “Instead of us having to go into a meeting and tell people how cool Iron Man is, they already know how cool Iron Man is. Marvel just continues to bleed into the general consciousness on a day-to-day basis, and becomes more of a lifestyle brand.”

Corporations and advertisers scramble and pay high prices to be associated with Marvel, which has grown into a multi-billion dollar, multi-platform lifestyle brand. There are the obvious corporate partners, like M&M’s and the Brooklyn Nets, and then there are the unexpected customers, like the Elks Club (the Avengers took on bullying and teenage substance abuse) and the Florida Department of Citrus meet the new Captain Citrus. Marvel incorporates corporate mascots into custom comic books, giving goofy animated pitchmen some street cred by associating them with Spider-Man; they can also create new heroes for a client, as was the case with the somewhat ill-fated BrooklyKnight. New Yorkers are a tougher crowd than supervillains.

That slip-up was a rare public instance of dissatisfaction. Bigger national brands and advocacy invest a whole lot in multifaceted campaigns, making bulk orders of custom comics that often surpass Marvel’s top-selling monthly titles, hundreds of thousands of custom-made copies. And with distribution by major corporations and even the City of New York (meet Ready Girl), these characters and campaigns are made available, free of charge, to huge swaths of the population.

Takeda, which makes the Crohn’s and Colitis drug Entyvio, saw Marvel as an obvious bridge for its potential customer base. Inflammatory bowel disease, which encompasses several diseases and problems, including Crohn’s and Colitis, is on the rise and most commonly found in young people. It’s also an illness that, despite awareness raising efforts over the last several years, isn’t the easiest to diagnose. Simply put, people are embarrassed to go to the doctor and talk about uncontrollable diarrhea, vice-grip constipation, or IBD’s many other unpleasant evils. These people need someone on their side.

The internet has helped open up the dialogue, to some extent, as a small niche of bloggers have emerged to write openly about struggling with IBD. Sarah Machemer, an internet fitness personality and personal trainer, was diagnosed with Crohn’s in 2002, and was part of a group of Takeda-selected advocates who worked with Marvel on the custom comic. Dr. David Rubin, the co-director of the Digestive Diseases Center at the University of Chicago, was also on the panel, helping Marvel’s team understand the message they wanted to get out to potential patients.

“It wasn’t about needing to be a superhero to live with IBD; it was much more about how everybody has some part of their identity that may be hidden, and has a life that they live beyond that hidden identity,” Rubin explained. “The whole point of this character and creating a superhero was to teach people that despite any kind of illness or disability that you can be an extraordinary person in many ways.”

Notably, the comic’s text never mentions what IBD is or even what the acronym means, which could lead to some confusion for readers that might stumble upon the comic book (the website has more information). But Marvel and Takeda are mostly targeting the comic book release to members of the community and the medical world in general, so they figured the main intended audience would already know what horrors those three little letters represent. The goal, as Rubin suggested, was to “not just focus on going to the bathroom.”

There are 10-12 employees of the Custom Solutions unit, but unlike many bespoke branded content firms, Marvel does not have an editorial wall; it uses its actual editorial staff to create the sponsored comic books, with a full roster of writers and artists available to pitch in. For a publisher that counts foul-mouthed Deadpool and heavy-drinking Wolverine among its most popular characters, that sometimes means some finessing when it comes time to write for image-conscious companies.

“We are submitting it to a client for approval, so there is a little bit more back and forth [with writers],” Ennis said. “There’s a little more commercial aspect to it. We may say, ‘Hey, we know you have a really cool, grim, gritty style, but smooth it out a little bit.’”

For the Takeda partnership, Marvel tapped Buddy Scalera, a veteran X-Men and Deadpool writer, to develop and write the IBD book. At a meeting in New York with Machemer, Rubin, and several other patients, Scalera and Marvel execs sought to better understand the digestive disease, a discussion in part focused on the extent to which people keep their IBD symptoms secret and the pain they suffer in silence. The bloggers and patients were peppered with questions about their experiences, helping Scalera better understand their ailment. First and foremost was the goal of normalizing the disease for people suffering in self-enforced secrecy.

When I was younger, I didn’t tell a lot of people,” Machemer said. “I was almost embarrassed by it. We don’t want you to feel that way. We want your friends and your loved ones to know about the condition and know what you’re going through to be there for you and we want that support team there for you.”

So they had their premise: An IBD patient struggling with the disease and trying to work up the courage to tell someone about their bowel problems. But what shape would this secret hero take? There was no shortage of ideas for the character. Machemer remembers discussions about making him (or, at one point, her) a farmer or a student; there was also conversation about giving the hero special dietary guidelines.

Ultimately, the group landed on something closer to home, fictionalizing the biography of a colleague who both researches the disease and suffers from it. To give that a comic book twist, they made the character a chemist who invents an incredible, impenetrable suit of armor. This makes him a force to be reckoned with when criminals raid his laboratory, but does not give him any more confidence when it comes to telling his crush, Emily, about his IBD (the exact disease, and the symptoms with which Ian is dealing, go unspecified throughout).

“While he has enhanced strength and durability, you juxtapose that power with the battle going on inside him, and the feeling of fighting against your body while on the outside nothing can harm you,” Ennis said. “We wouldn’t have thought of that juxtaposition, and as a result wouldn’t have come up with that power, without having those discussions.”

Marvel and Takeda have a long-term plan for Samarium, including more issues of the comic book slated for future release (he’ll get an origin story in one of those books, if they continue according to plan). And while the character is not eligible to appear in the mainstream comics, movies, or TV shows on which Marvel has built its brand, he’s joining a growing branded task force.

There are a few basic ground rules for these capitalist Avengers: They don’t push cigarettes (Marvel heroes are forbidden from smoking in comic books) and they don’t tend to get political. But they do get pretty on the nose. Marvel has no qualms about making Spider-Man a pitchman for absorbent potty training underwear. The Custom Solutions team is small, but has an increasingly large role in both generating income, and creating awareness for Marvel in communities that might not know much about comic books.

“We have a partner that is ordering these books, and they may order a million books, and that’s a lot of comic books,” Ennis said. “And for those million people that are going to get these things, it may be their first comic books. In a lot of cases, it is their first comics, because we’re working with brands whose audiences may not be avid comic fans. It really pulls people into the comic stores. Sometimes our print runs are bigger than the monthlies.”

It’s a win-win for Marvel at the moment, which gets to market itself and get other people to pay for it. If comic book movies reach a point of oversaturation, having Captain America pitching facial soap (he’s got a deal with Kiehl’s) may not do much to help that situation. But, for now, after over half a century on the fringes of pop culture, Marvel is enjoying its sudden mainstream cachet, cashing in and flexing its superpowered, Hulk-like muscles.