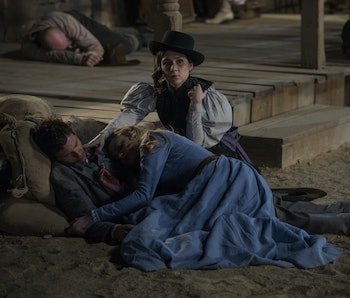 The first Westworld episode was brimming with literary references, shootouts, and nods to excellent Twilight Zone episodes. And yet, for all its allusions, it withheld much of the hard information about the nature of its world, leaving us to parse out the mysterious Man in Black’s agenda, the park management’s true motives, and even the extent of that seemingly-vast landscape.

And although the premiere took a deep-dive into the nature of the robot’s consciousness, their true nature still remains an enigma. At the very least, though, we began to get an idea of how humans control these advanced animatronics: spoken-word commands, which seem conversational until a robot shuts down mid-sentence.

Here are all the commands that appeared in the first episode. Although the robots are asked questions like “Have you ever questioned the nature of your reality?” and “What are your drives?” we chose to focus on direct commands that result in behavioral action.

“Bring her back online”

Although, this command is technically said from one human to another, it’s the first thing we hear Jeffrey Wright’s character say about Dolores and it comes up again frequently, for every naked robot interrogation.

“You can lose the accent”

This is another command we hear several times. Jeffrey Wright’s Bernard says it first, and Luke Hemsworth’s Stubbs later repeats it, and it instantly makes Dolores lose her “golly gee” affectation.

“Soon this will feel like a distant dream. Until then, may you rest in a deep and dreamless slumber”

We hear this command several times — Anthony Hopkins’s Dr. Robert Ford says it to the cowboy-robot in his introductory basement scene, and Shannon Woodward’s Elise later says it to Dolores. Elise seems overly tender towards the robots, even going so far as to kiss one and wearing a Western costume, for some reason, later in the episode. Thus the first half of her speech seems to be an add-on. “Deep and Dreamless Slumber” are the key words.

“You can put yourself away again, won’t you?”

Dr. Ford says this to the cowboy-bot after first making him go into sleep-mode in the basement.

“Cognition only, no emotional affect.”

Stubbs says this to Dolores in her final naked-interrogation scene, when she comes to and immediately panics, still apparently thinking she’s in the “storyline” in which she has just been raped by Ed Harris’s Man in Black and seen her cowboy suitor die. The command immediately halts her panicked breaths and sees her affect a placid demeanor.

Ford says this to Dolores’s first father Peter Abernathy during his naked-interrogation scene after he has seemingly had a nervous breakdown, which is rather unusual for a robot.

And who knows what commands future episodes might bring — after all, these violent delights have violent ends.