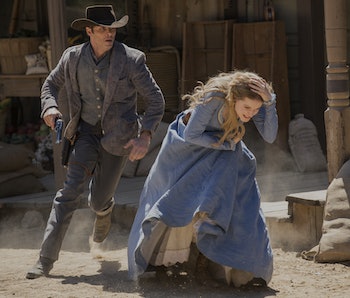 The show may be called Westworld, but as fans of the soon-to-be HBO hit’s source material well know, the Delos Corporation, which created the town of Sweetwater and its inhabitants, operates more than one theme park. Michael Crichton’s 1973 film, which Jonathan and Lisa Joy Nolan have adapted into the television series, focuses on guests living in a finely detailed fantasy version of the Old West, but also features other environments. As the Delos tech breaks down, the protagonists enter both Roman World and Medieval World, which are exactly what they sound like.

One episode into its first 10-episode season, Westworld has already attracted a lot of speculation, plenty of which revolves around the notion that the show will follow human characters to other doomed Delos Corporation parks. Inverse has learned, however, that the show will stay put through all of Season 1. After that, well, anything might happen.

“For the first season, we only explore the West World,” production designer Zack Grobler tells Inverse. “There’s talk about in the future seasons, if there’s more, that there will be a different world. But we’re not sure what it will be yet.”

It’s worth noting that there is a Westworld expanded universe. Crichton’s film received a sequel, Futureworld, in 1976 — the author was not involved — that expanded the park’s historical purview. That movie was based on the premise that, after the disaster that nearly destroyed the parks in the first film, Delos reopened with areas called Spaworld, Medievalworld, Ancient Romanworld, and Futureworld (the last one is a simulated space station). That gives Nolan and his crew a lot of territory to work with within the canon. Still, Grobler is quick to point out that all the worlds are not created equal.

“Obviously I watched all their movies, and I was a big fan of all the other ones,” he says. “I have to say they’re not as good as the first one, though.”