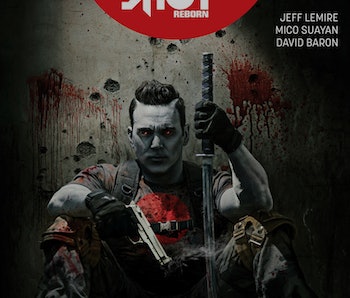 It’s not morphin’ time anymore. Champion martial artist and former Mighty Morphin Power Rangers star Jason David Frank is definitely teaming up with Valiant comics for a new on-screen project. Frank will play Bloodshot, one of Valiant’s signature superheroes, in a collaboration with Bat in the Sun. We’re sure Frank is on board, but we won’t know for sure what form the project will take (web series, film, etc.) until next week’s New York Comic Con.

Frank got his break playing Tommy, the Green Ranger (and later the White, Red, and Black Ranger) in Power Rangers as the Green Ranger continues his involvement with Bat in the Sun, a group of YouTube filmmakers known for the fanboy web series Super Power Beat Down, where superhero icons fight each other. Frank has starred in two videos: White Ranger vs. Scorpion in 2013, and Green Ranger vs. Ryu in 2014. Frank also had his reality series My Morphin Life released through Bat in the Sun.

Bloodshot, aka Angelo Mortalli, is a soldier subjected to Project Rising Sun, a government experiment that peaked in World War II. Unlike Marvel’s Captain America, Bloodshot is more bloodthirsty and efficient as a killer who can regenerate and shape shift his body. But Angelo has has no memory of who he was before and searches to learn his former identity.

At New York Comic Con, Valiant will announce the full extent of its plans with Bat in the Sun. The first look at Frank as Bloodshot comes from an exclusive variant cover of Bloodshot Reborn #14 to be sold at the convention.

Check out Frank’s last Super Power Beat Down, where he reprised his role as Tommy the Green Ranger against Ryu from Street Fighter.

More like this
Entertainment
6.24.2022 11:15 AM
Behind the scenes at “Herogasm,” The Boys’ most NSFW episode ever
By Aaron Pruner and Jake Kleinman
Entertainment
6.30.2022 7:00 AM
The Boys Season 3 Episode 7 release date, time, plot, cast, and trailer for the Amazon show
By Jeff Spry
Culture
6.29.2022 10:00 AM
6 years ago, Marvel released its most incoherent sequel ever
By Graeme McMillan
Related Tags
Share: