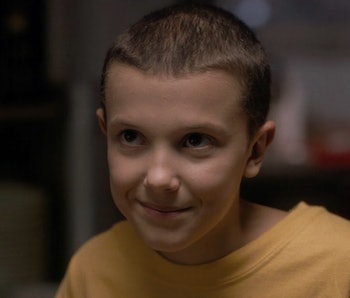 It seems Hawkins, Indiana, is in store for an invasion of tiny, short-haired badasses in Season 2 of Stranger Things. Bring on the army of Elevens!

Okay, so they won’t necessarily be tiny since the casting call posted on Backstage is asking for people 18 and older. But the women are expected to be willing to cut their hair/bangs, and who do we know on Stranger Things with short hair? Eleven.

Again, okay, we don’t know that the Duffer brothers are going to shave a bunch of 18-year-olds’ heads. But give us some breathing room: It would be so cool if Eleven wasn’t the only one in that lab. Or … maybe we don’t want to inflict that kind of pain and trauma on multiple people.

Eleven’s shaved head is equally saddening and intriguing — for what it means she’s gone through and how it smashes gender norms — but we can’t really assume that Bad Man Brenner’s team accomplished so much with just one, young subject.

We know from Season 1 of Stranger Things that Terry Ives was involved with Brenner’s group and underwent some experimentation herself. They would have gotten far in their experimentations with a group of adults — they’re stronger and can probably put up with more pain — especially if they were as drugged as Ives was while in their clutches. Perhaps these new characters for Season 2 will be past subjects that underwent the same kind of thing as Eleven, and allowed Brenner to finally create a viable subject after the others were spent.

Or these could just be extras for this upcoming season. I guess we won’t know until Season 2 of Stranger Things.