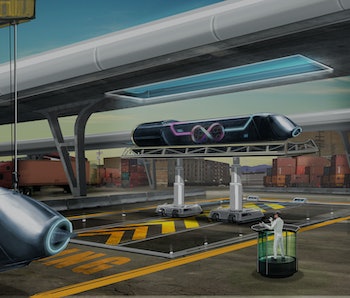 Hyperloop One is beginning a 12-week residency in Dubai as part of the Future Accelerators Program. The eventual goal of the project is to connect the entire region via hyperloop. The United Arab Emirates is officially signing off on Elon Musk’s brainchild, and on the hyperloop as the future of transportation.

Hyperloop One claims that there were over “2,000 applications from 73 countries,” and that under 40 of these applicants were selected. It also claims, in a press release, that it’s a “leading participant,” which sounds egotistical, but which — given the revolutionary technology at stake, and how impressive hyperloops would be — is probably true.

The Dubai Future Accelerators website makes it seem like there shall be absolutely zero fucking around during these 12 weeks. “This is not about how to write a business plan or how to pitch your startup. It’s not about coding languages or SEO,” the website states. “We aren’t going to tell you how to run your business or how to develop your website.”

“This is about changing the world. Today.”

Hyperloop One CEO Rob Lloyd, for his part, is confident. “We believe that the Dubai Future Accelerators is the venue that will put into motion the creation and implementation of a Hyperloop for Dubai to connect the entire region,” he said. And his team, from the looks of it, is hard at work:

They’d better be, because they are getting paid. Hyperloop One writes that there are “up to $2 million in grants for each member while they’re in the program, and the Dubai Future Foundation that backs the program can tap into the emirate’s Future Endowment Fund worth $275 million for the finalists in the program.” Not too shabby.

To build a hyperloop, it takes money and government cooperation. Hyperloop One found both in Dubai.