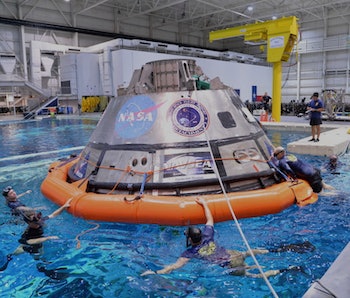 Everyone makes a big fuss about how to launch rockets up into space, but it’s important to remember that we also need to know how to recover them once they come back down to Earth. That’s why NASA is rehearsing how to best get its Orion spacecraft out of the ocean post-splashdown.

Orion — the space agency’s first new human spacecraft in a decade — might one day take mankind to Mars. It’s one of NASA’s biggest projects alongside the massive Space Launch System that will rocket it into space. Orion’s first flight on the SLS, Exploration Mission-1, won’t boast human passengers, but the testing process is extremely thorough. Hence, water.

Like the Apollo spacecraft before it, Orion will land in the water rather than on a runway like the Spaceshutter, which was built for much less-distant trips into space. NASA tested the splashdown last month, and measured how the impact into the water would affect the people inside, and now they’re rehearsing the next step — recovery.

Orion was placed in NASA’s massive testing pool — the Neutral Buoyancy Laboratory — at the agency’s Johnson Space Center in Houston. A group of U.S. Navy divers, Air Force pararescuemen, and Coast Guard rescue swimmers came out to the floating craft to practice recovering the capsule, connecting cable lines that, in the real word, would tie to a Navy ship.

The rehearsals, which will also help prepare for the Underway Recovery Test 5 — the first major integrated test of the craft — began on September 20 and are expected to wrap up by the 22nd.

Exploration Mission-1 will take Orion around 40,000 miles past the moon for a three-week mission testing its systems and —- when it comes back to Earth for the much-preparedfor splashdown — its heat shield.