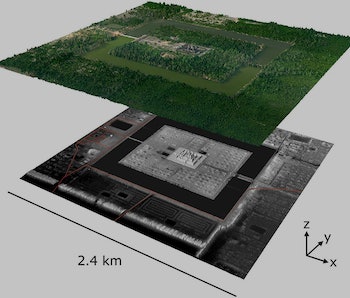 Until recently, archaeologists didn’t know much about a secret underground town rumored to exist just outside the temple walls of the Cambodian city of Angkor Wat. It was presumed to be there because someone must have built the sprawling temple, but actually finding it in the now-forested landscape remained a challenge. Mapping the area using traditional methods is inordinately time-consuming, and even low-lying vegetation obscures clues to the city below, now consumed by the tropical landscape.

This has changed, thanks to LIDAR, an acronym for Light Detection And Ranging. Here’s how it works: an instrument shoots laser beams out into the surrounding area, measuring the time it takes the light to bounce off objects and return. This allows for very precise 3D maps of the solid features of an environment. It works on the same principle as radar or sonar, except it uses light waves rather than radio waves or sound waves. But it’s a lot cheaper: The price drop for lasers is a major boon for the world of archeology, and LIDAR surely has much more to tell us about the hidden world beneath our feet.

When mapping a large area, like Angkor, the laser array will be mounted to a plane, helicopter, or drone, which flies overhead, collecting data. But LIDAR scans can also be taken from fixed or moving points on the ground — even from space — depending on the application. Most prototypes of self-driving cars carry LIDAR equipment, which works well in the dark but not so much in the snow or rain, although Elon Musk says he can improve other systems to make LIDAR unnecessary.

Fortunately, archeological mapping can wait for fair weather, and the returns on investment are astounding. LIDAR scans of Angkor not only cover a much larger area in a small fraction of the time, they also reveal details of the terrain previously missed by even the most careful traditional ground surveys. “LIDAR provides an unparalleled ability to penetrate dense vegetation cover and map archaeological remains on the forest floor,” write Damian Evans of the University of Sydney and coauthors in a 2013 study of Angkor published in the Proceedings of the National Academy of Sciences. “It can uncover and map microtopographic relief that otherwise cannot be discerned without very costly and labor-intensive programs of ground survey.”

And in the case of Angkor, it makes hunting for hidden cities a total possibility: A computer program takes the data from the LIDAR scan and filters out information from the vegetation above ground, offering a close look at the topography below. Patterns of shallow depressions in the Earth’s surface show where human activities have disturbed the landscape, offering evidence of streets and buildings below. Et voila, a new city is unearthed.