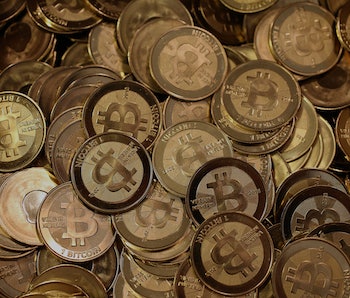 Santander may become the world’s first bank to give its customers digital money powered by blockchain, a database technology used by cryptocurrency bitcoin. The plan would grant people the ability to “tokenize” their cash and make small payments, similar to Venmo. The digital currency, currently known as “Cash ETH,” could be used for small transactions like paying for coffee, filling up with gas, or even to access individual news articles on a website.

“These tokens are backed by real money in Santander,” Roman Mandeleil, founder of blockchain-based development platform Ether.camp, told CoinDesk in a story published Tuesday. The bank told the publication that it is working with Ether.camp on implementing the blockchain. “At any moment you can get them back and get the dollars.”

On a site that supports Cash ETH, users would enter their public key, confirm the amount they want to pay and transfer. It’s not just big businesses that could use it, though. Users could send each other small payments, reducing the need to carry around a pocket full of coins just to settle debts.

It may not sound too different to the likes of PayPal, but the project would signal that a major bank is confident in blockchain technology. There’s a number of proposed uses of the system, like secure digital voting and patent protection, but using it in a key financial setting could help spur further development of a digital transaction system that works with a more transparent technology.

“You can start to build more and more stuff and say to the regulators ‘It’s not so scary,’” Mandeleil told CoinDesk.

Issues remain, though. The project has been in the works for seven months now, but there’s still some concerns with regulations, and how compatibility with other banks would work. One solution proposed by Mandeleil is a cryptocurrency conversion service, similar to ShapeShift, but that would entail an additional layer of complexity. If talks with third parties are successful, a solution could be reached that provides more seamless transactions.