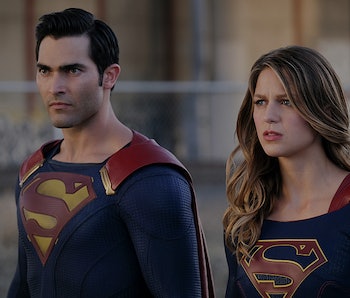 It’s a tradition in the Super-Family for members to save a crashing aircraft, and Tyler Hoechlin’s Superman on the CW’s Supergirl is no exception — although this time, it’s a whole dang spaceship, and his cousin Kara Zor-El helps out.

The stakes here are obviously much higher than when Supergirl (Melissa Benoist) saved a commercial airline in her debut act of superheroism. But what kind of failed space mission is happening that winds up requiring the help of two Kryptonians? Could it be the handiwork of Maxwell Lord? Lord was given alien tech in the Season 1 finale, but what’s he up to when Season 2 starts?

“Ground control has lost communication with the craft,” says an unidentified narrator with the voice of a news reporter. “They fear something catastrophic may have occurred.” Hm, you think?

The promo continues with another different, still unidentified voice narrating about Superman (using “he” pronouns). Benoist’s Kara Danvers also gets a line in, saying: “I’ve dreamt of this moment. The two of us teaming up.”

The whole 30-second promo is remarkably somber, grim, and more ominous than the eternal ray of sunshine that is Supergirl. This spaceship plot indicates the Season 2 premiere will be a little darker than the show has been before, but with a guy like Superman, how dark can things really be? (Please don’t bring up Dawn of Justice.)

Supergirl returns October 10 on the CW.