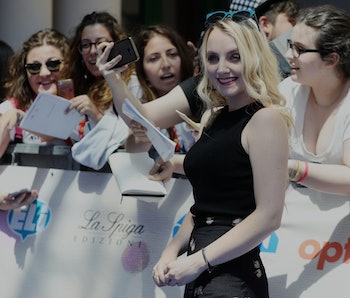 Wizarding fashion has been a controversial subject in the Harry Potter universe since Ron Weasley’s disastrous Yule Ball dress robes, but Luna Lovegood says the outfits in The Cursed Child have given her a serious case of robe-envy.

Harry Potter star Evanna Lynch — who played Luna Lovegood in the films —recently saw the Cursed Child play and left with an interesting comment: “Most prominent regret of life: having had Hogwarts robes and not unlocking maximum swish potential. Like, damn. #CursedChild was SO SWISHY,” she said on Twitter.

Just like Luna Lovegood’s observations about nargles and crumple horned snorkacks, this is both funny and insightful, speaking to a larger topic: we’re talking wizarding world fashion and how it’s evolved through the years.

Thanks to production photos from the forthcoming Potterverse prequel Fantastic Beasts and Where to Find Them, which is set in 1920s New York, we know what wizard fashion looked like in the Prohibition era. Eddie Redmayne’s Newt Scamander — who is Luna’s grandfather-in-law — seems to be something of a dandy, favoring a colorful blue overcoat and mustard vest combo.

Recall that in Goblet of Fire — which takes place in 1994 — Ron is highly displeased with his out-of-fashion dress robes for the Yule Ball. Mrs. Weasely must buy him secondhand robes. “Well they’re all right!” he says of Harry’s, jealous of their lack of frills. “No lace, no dodgy little collar…”

The Potter novels doesn’t describe Harry, Ron, Hermione, and their classmates fashion much beyond robes, but the movies put the cast in typical present day British Muggle streetwear: leather jackets and sweaters. Dudley and his pals are no doubt intentionally chav-like, favoring tracksuits and chains.

As for the Marauder generation, we know from Harry’s parents’ gravestones that they were born in 1960, which means The Marauders attended Hogwarts in the height of the 1970s. Although we don’t get much about 70’s fashion in the novels — aside from remarks about Sirius’s long hair during Harry’s Pensieve jaunt in Order of the Phoenix — JK Rowling wrote a short 800 word “prequel” for charity in 2008. In it, a Muggle policeman observes the following about a ‘70s era James and Sirius:

They seemed to be in their late teens. The one who had been driving had long black hair; his insolent good looks reminded Fisher unpleasantly of his daughter’s guitar playing, layabout boyfriend. The second boy also had black hair, though his was short and stuck up in all directions; he wore glasses and a broad grin. Both were dressed in T-shirts emblazoned with a large golden bird; the emblem, no doubt, of some deafening, tuneless rock band.

All in all, fashion is hardly the most prevalent part of the Potterverse, but like everything else in this richly developed, textured world, it’s there for those who see it.