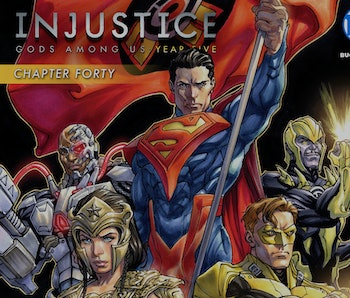 No one could have guessed that Injustice: Gods Among Us would last longer than the video game it was based on. DC will publish Issue #40, the last of the series, on September 20.

Brian Buccellato, Injustice’s current writer, credits Tom Taylor, the original author, for the comic’s success. “[Taylor] put together this template for what fans loved, and it was about character moments,” Buccellato told Inverse. “It’s hard for any book to survive, especially based on a video game where you know the ending. It’s impressive to me this book has been able to thrive.”

While fans have long put down their controllers on the Injustice game, they kept picking up the comics, which Buccellato thinks was because of DC’s familiar and flexible universe. “Yes, you know how the video game’s going to play out, but there’s a host of characters that are not in the game,” said Buccellato.

One such character was Batman’s butler, guardian, and conscience, Alfred Pennyworth. Killed by order of a tyrannical Superman in issue #23, Alfred’s death was not a careless decision, says Buccalleto. “As I was outlining Year Five, I wanted to put Batman to the test,” he explained. “The genesis of killing Alfred was to see how he would react. Because Batman won’t cross the line Superman crossed. He won’t murder because he knows that’s a slippery slope, and that’s the whole point of this story.”

With Injustice: Year Five ending and DC preparing to launch Injustice 2 next year, Buccellato walked Inverse through some of the book’s most interesting decisions while also explaining how good prequels work.

Safe to say everyone reading Injustice had long played and finished the game. What’s the secret to keeping a prequel story exciting?

The great thing about the DC Universe is that it’s 75 years old and there are a bazillion characters. You have the opportunity to focus on a wide range of characters, see the world through different eyes. It’s the ability to bring in all these characters and see how this horrific reality unfolds. I don’t think anybody felt Harley [Quinn] would be like, this sort of POV character.

You played off the 75 years of DC’s continuity people are familiar with. But you also had to play off an alternate world with the parallel Regime/Insurgency, which upended a lot of familiar characters. How exhausting was that?

Only exhausting insofar as there’s so much information to keep in your head. Having to negotiate this huge universe in one book is daunting, but it’s also liberating in that I get to write and treat characters the way I see fit.

I can kill Alfred. I did it for story reasons, not shock value. I did it to explore how Bruce would handle a parallel situation that broke Superman. The death that inspired this video game, the inciting incident that caused him to become Regime Superman, I wanted to put Batman through that and see how he would react. The whole thing is liberating. It’s daunting, and a hell of a ride.

About your freedom in the DC Universe, let’s rewind to Year Three. Tom Taylor introduced John Constantine, which you had to continue. What was it like having him, who is so unlike all other DC heroes and wasn’t in the game, in Injustice?

Tom was very smart to put John at the center. He’s con-man Batman. Writing [him] was fun because he’s he’s got great personality, you can’t trust him. Characters you can’t trust makes for interesting stories. At the end of the day, he had his own agenda and won. It’s not that often Batman gets beaten by somebody or out-thought. He’s supposed to be the smartest man in the room and I think in Year Three he ended up not being that.

In Issue #40 you have an interesting exchange between Regime Superman and Insurgency Batman. According to Batman, Superman “takes guns away.” Where do you think, as a comic writer, Superman actually falls on the debate?

I have a feeling he would intervene to some degree. I don’t think Superman, the spirit of Superman, would be interested in taking guns away. I think from a political standpoint people do have their right to own guns, but I think some regulation is necessary. Superman is a sensible guy and would probably want sort of sensible laws enacted to maximize the safety of people. There’s a happy medium and I think that’s the real problem in this world, and Regime Superman is an example of going too far in one direction.

In 2016 we saw a lot of superheroes fight each other, which Injustice was all about. Why do you think this year was especially potent for this kind of spectacle?

I think there’s drama in people who are friends, allies, having differences and fighting each other. I think that used to be a staple of comic books from when I was growing up. It always seemed to be that two heroes would, if there was a guest star in a comic, one of them would show up and they would fight for a while and realize, Hey, we’re friends. Let’s join together. I feel like it’s true to the spirit of the comics I remember as a kid.

Injustice: Year Five finishes with issue #40 on September 20. Injustice 2 releases on consoles in 2017. Tom Taylor returns to the series in the Injustice 2 prequel comic.

More like this
Gaming
19 hours ago
Dull gameplay holds back a daring story in Digimon Survive
By George Yang
Gaming
18 hours ago
Diofield Chronicle is a slow burn, for better and worse
By Hayes Madsen
Gaming
15 hours ago
Everything we know about the mysterious new Tekken game
By Willa Rowe
Related Tags
Share: