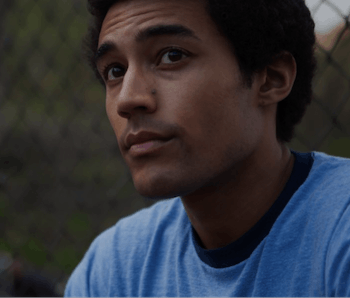 What is it about the young Barack Obama that is so inspiring to young filmmakers? Here’s a theory: The future president lived so many lives before the age of 30 that just about anyone can see something of themselves in his early years.

Obama’s unmoored twenties have already provided filmmakers with the raw material to tell very different stories. Richard Tanne, in this summer’s Southside With You, focused on Obama as a 28-year-old Harvard law student, charming and confident enough to ask the boss out on a date in the summer of 1989. In Barry, director Vikram Gandhi follows a more conflicted and searching Obama in 1981 as he navigates his first year as a transfer student at Columbia University. In some ways, it’s a familiar subject for the filmmaker: Gandhi himself went to Columbia (albeit a few decades later), and even lived in the same building on West 109th Street as the future president. Update: The film, which premiered at the Toronto International Film Festival, was bought on Saturday by Netflix.

“I don’t think I can really divorce my own personal experience from the reason I thought that was a good time [to depict],” Gandhi told Inverse this week, relaying how his own time in the area helped shape his understanding of the world Obama inhabited. “I knew enough about New York in ’81 and the neighborhood and the experiences going to college there. I knew that if you lived on that block, your neighbors lived with their parents, dealt drugs, bummed cigarettes off you when you came home drunk late at night. I knew the bodega he was going to, he must have gone to to get soda.”

A relative familiarity with the 20-year-old Obama’s neighborhood and snack routine was not, of course, the only reason Gandhi, a journalist and documentarian for Vice, wanted to make an entire feature film about this period in the president’s life. He had read the president’s best-selling memoir, Dreams From My Father, during Obama’s first run for the White House, and was struck by what seemed to him a glossed-over event.

“At the beginning of chapter seven he writes, ‘In 1983, I decided to become a community organizer,’” Gandhi said, reading from the book. “So, right after he left Columbia, he decided to become a community organizer. What that means to me is that during that period of time, where he was extremely introverted, he didn’t have that many friends, he’s going through like a monk-ish phase, going through major internal changes in that time.”

Gandhi’s Obama, played by newcomer Devon Terrell, is still going by the name Barry, and is in many other ways still a long ways away from finding his true identity and purpose. Much of the internal conflict Obama felt back then, Gandhi’s film suggests, had to do with race. He was certainly dealing with a potent cocktail of circumstances: Obama was a biracial man arriving in a very divided New York in the early 1980s, raised by a white mother but unmistakably the son of an African man, living on the edge of an uptown bubble where mostly white academia met a neighborhood populated mainly by people of color. He grew up around the world but had never lived in a place where people looked like him; always the outsider, he was being offered the opportunity to discover another part of his identity.

“It seemed like it was clear that it must have informed who he would become, especially since he was going through such an internal time,” Gandhi said. “This is his first access to black American culture. Harlem is a place where you could explore what it meant to be African-American in a way that he couldn’t in Hawaii.”

He pieced together as much of the sparse information available about Obama’s time at Columbia as he could, deciding on a supporting cast that included his first roommate (played by Boyhood’s Ellar Coltrane), a fictionalized version of his Pakistani friend and future roommate (Avi Nash) and a composite of several different girlfriends, here named Charlotte (Anya Taylor-Joy). The 109th Street apartment was appropriately shitty and the block, grungy in that unmistakable early Koch-era way (the blunt-talking late former mayor even cameos in an old interview playing on TV at one point).

Because that time hadn’t been well-documented, Gandhi was able to write his own fictionalized version of the difficult year of transition, and Gandhi imagined young Barry torn between two different worlds. His mother (played by Jenna Elfman) is white, as is his girlfriend, and they both boast the 1981 equivalent to Caucasian wokeness. In some ways, they openly embrace black culture more than Barry does, or at least do so in more well-intentioned but painfully awkward ways. He quietly explores house parties and street basketball games in Harlem by himself and with a business school pal (Jason Mitchell) who has local friends, but when his two worlds mix, he can’t handle the friction, which he may or may not be imagining.

“What I was really trying to show was this sort of awkward disconnect between white liberal culture-ism and being a minority,” Gandhi said, undoubtedly no stranger to the experience. “Ideologically, they’re in the exact same place oftentimes. But there’s certain things about white privilege that Charlotte would never understand.”

The irritation is only exacerbated when Barry finds out that Charlotte may have dated another black man in the past.

“Was he being paranoid about his girlfriend being interested in other black men, or was not paranoid enough, not seeing the obvious?” the filmmaker asked. “The film doesn’t say one way or the other. But the feeling of insecurity that the woman he’s with is interested in him for reasons that are only skin-deep is something that I think that would be universal for really anybody who’s trying to figure out who they are at that time.”

The film travels back and forth between the two worlds, neither of which he feels completely at ease in. He’s always the other; whether he’s at a restaurant in Harlem with Charlotte, or a Columbia philosophy lecture with white classmates, he feels like an alien, alone in the center of the room, all eyes on him, the forever outsider.

While probing and imagining Obama’s year of self-discovery, Gandhi doesn’t want to suggest too much causation, or to link the events of 1981-82 with any particular decision made in the White House 30 years later. As a journalist, he’s skeptical about the idea that we even know much at all about Barack Obama, the president, and what makes him tick.

“Barack Obama is someone who may be the most documented human being that’s ever lived, but every documentation of him is a planned media event,” he said. “The idea that we understand who any celebrity is, or anybody that we know through only like YouTube videos and stuff is kind of bullshit. We live in a landscape of news that creates the narrative that often has a lot of difference from reality.”

There’s a theory that, given just how relatively scandal-free the Obama White House has been over two full terms, the most interesting movies about the president might be set in the time before he entered the Oval Office. Gandhi thinks that, if anything, the most interesting movie about Obama might be one about where he’s at right now, as his second term winds down and he watches Donald Trump activate a white supremacist movement that seemed in decline in November of 2008.

“At this point you see a man in his eighth year at the end of his second term, watching the country go six steps backwards when it comes to new candidates, and seeing black youth being killed by police,” Gandhi said. “If anything, I could imagine, as we talk now, seeing him in a movie about his last days, while he’s trying to figure out what the fuck went wrong.”

More like this
Culture
Sep. 16, 2022
How an ultra-nationalist religious group became one of the most popular film producers in Japan
By Alicia Haddick
Entertainment
Sep. 26, 2022
Christian Bale reveals the secrets of his “weird” transformation in Amsterdam
By Jake Kleinman
Entertainment
3 hours ago
Wolverine in Deadpool 3 solves Marvel’s biggest canon problem
By Jake Kleinman
Related Tags
Share: