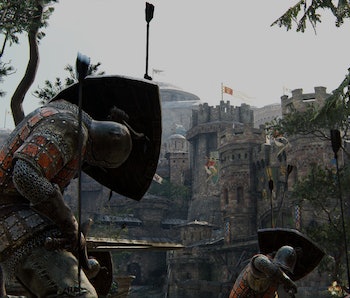 Ubisoft’s only just opened their first alpha testing phase for, er, For Honor, allowing people to step into the shoes of a Knight, Viking, or Samurai and start intense sword battles with their friends. Like just about every other multiplayer game out there, For Honor features a few different modes with alternating gameplay scenarios — and Duel is without a doubt the best one.

Most of what we’ve seen from For Honor so far has been focused heavily on Dominion, the game’s four-on-four territorial game mode that plays in a way similar to Domination from standard shooters. But, despite being the spearhead of For Honor so far, it just doesn’t feel like the best experience the game has to offer.

See, the game involves a new type of combat system — the development team has dubbed it “Art of Battle” — where players actively block and attack from different angles. This is complimented by a class system, each with certain combat abilities and combos. Think of it like something you’d see in Street Fighter or Tekken, just with a more atmospheric (medieval) twist.

The system puts a much greater emphasis on player skill as a result, rewarding you for learning to actively handle your weapon both offensively and defensively. But this system only works well in a one-on-one or one-on-two engagement when you aren’t swarmed with opponents.

Instead of intricate and intense sword fights, Dominion typically ends with swarms of players swinging wildly. No matter how you approach an engagement, you’ll be forced into fighting two, three, or even four other players — all scenarios which end with you lying on the ground no matter what you do. The game’s only so responsive, and when four other players are slashing madly at you, it simply can’t keep up. That’s where Duel comes in.

Duel places you and another player of similar skill on a small area from one of the game’s larger maps with the only goal being: Kill your opponent. Each match is best of five, with the first player to three emerging victorious. The mode keeps you focused on a single target, and places you both on an even playing field where skill and timing matter most. No wild slashing from all sides here.

One-on-one fights are tense as you exchange blows with your opponent since each is a valuable opportunity. It forces you to think about each block, strike, and ability available to you, and how you can use them effectively. Each engagement feels equally balanced too, meaning you clearly know what mistake resulted in you losing your head.

While the idea of making large-scale battles and A.I. combat a part of the game to provide that traditional sense of epic sword-based combat is completely understandable, it just doesn’t play nice with For Honor’s combat system. Duel is, without a doubt, where For Honor really shines.