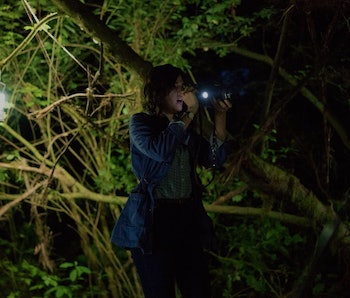 The main reason the classic 1999 movie The Blair Witch Project was so effective is because it looked terrible, even then.

In 1999, viewers didn’t know what to make of the grainy, black-and-white footage and pixelated camcorder shots. The amateur-style footage was allegedly recovered from documentarians who disappeared in in the Black Hills of Maryland while researching the local legend of the Blair Witch, which gave it an air of authenticity. And it was shot in an authentic way: directors Daniel Myrick and Eduardo Sanchez actually had their actors go out into the woods and find their way around using maps. They filmed the entire movie themselves with a 16mm camera and an RCA Hi8 Camcorder.

Viewers were fooled into thinking the movie was actually assembled from discovered tapes and film canisters only to learn later that it was a hoax. The genre blew up after the original, and now 17 years later, the sequel — shortened to simply, Blair Witch — is dealing with not only the original’s legacy, but nearly two decades’ worth of imitators.

Luckily, technology has grown in leaps and bounds over the last few decades, which allowed Blair Witch director Adam Wingard to seamlessly update the original concept.

Curiously enough, one of the other characters, a suspicious outsider named Lane — a conspiracy theorist and Blair Witch legend fanboy — brings along a Sony DCR-TRV120 Digital Camcorder. This is explained away by saying that the outdated, standard-definition, tape-based camera is more reliable than memory cards. The movie itself also functions as a way to harken back to the standard-definition, digital footage shot by the characters in The Blair Witch Project.

The most fascinating update is the constantly rolling Bluetooth earpiece cameras, which are used as a plot device to explain why the footage even exists in the first place. There doesn’t seem to be any real-life equivalent to the cameras, which the film claims shoots HD POV footage. Police body cameras exist, as do earpiece cameras that look like the ones from Blair Witch, but they mostly shoot video with less resolution than consumer smartphones, which the characters in the film never whip out to capture any of the spooky happenings anyway. In Blair Witch, the shaky POV horror is crystal clear.

Also, unlike the original, this updated tech actually factors into the plot instead of simply being the way we see what is presented before us.

When the spooky stuff starts happening, there’s no cell phone service to help them (naturally), and the Blair Witch’s powers futzes with the GPS, which gets our hapless characters even more lost. Soon, they use the drone — which was originally going to be used for “cheap helicopter shots” for the documentary they’re making — to see above the tree line and try to find a way out. Unfortunately for our characters once again, the witch’s fickle base of operations in the woods has somehow expanded under a spell to make it seem like theres only green forest for as far as the drone’s lens can see.

But it’s the Sony Digital Camcorder that makes the biggest impact in the film’s tense finale. (Here’s your spoiler warning.) Our heroine Lisa, whose friends have been picked off one by one, stands facing a corner to stay safe, per the legend of the Blair Witch. Looking into her eyes kills you, so to avoid that, Lisa ingeniously flips the camera viewpoint behind her while keeping a terrified eye on the viewfinder to stay alive.

More like this
Culture
Sep. 18, 2022
You need to watch the sexiest sci-fi thriller of all time on Amazon Prime ASAP
By Andy Crump
Entertainment
16 hours ago
Knock at the Cabin trailer gets roasted online for one bizarre mistake
By Alex Welch
Entertainment
Sep. 20, 2022
Constantine 2 signals new life for DC movies — but at what cost?
By Eric Francisco
Related Tags
Share: