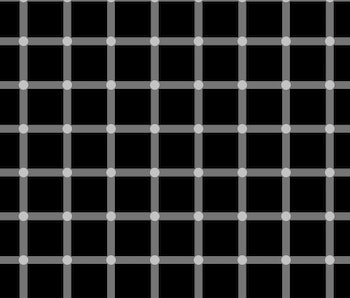 See that box above this paragraph? It’s seemingly simple, with gray squares on a white background going up and down, overlaid with another set of squares. It’s called the Hermann grid illusion, and is one of those headscratchers that will simultaneously confuse you and frustrate you. Named for German scientist Ludimar Hermann, this grid deception is commonly explained as an effect of lateral inhibition. There are 12 little black dots embedded in there, but for most people, they can only see one at a time. Shuffle your eyes from side to side and you will see the others pop up; squint and you might see a few, maybe several at the same time.

Why does this illusion happen? Lateral inhibition is a physiological mechanism rooted in the retina, causing the brighter surroundings to an area seem darker; in turn, darker surroundings appear lighter. So if you have dark gray bands surrounding a white area on a grid, the black dots you’re not focusing appear to be invisible. Essentially, lateral inhibition keeps the light receptors of the retina from firing off and makes the eye perceive more light or darkness than there actually is. It doesn’t matter what colors are where, as long as they are very contrasting.

While the lateral inhibition theory is the most common explanation for the illusion, scientists at MIT’s Schiller Lab argue that it’s not what’s happening in the retina that matters. Rather, according to the “S1 simple-cell theory,” the contrasts muck with your mind, confusing your cortex.

If you want to test out your own brain’s ability to get tricked, try your best on Hermann grid variation posted Monday by game designer Will Kerslake:

More like this
Science
5.18.2022 7:00 PM
Look: ESA captures remarkable images of a “hedgehog” structure on the Sun
By Jennifer Walter
Science
22 hours ago
Pollution is responsible for one in six deaths each year — and it’s getting worse
By Tara Yarlagadda
Science
7 hours ago
These galaxies have no dark matter — and astronomers may finally know why
By Charles Q. Choi
Share: