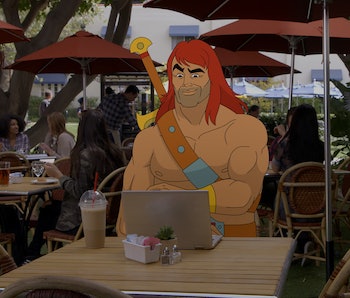 In the new Fox comedy Son of Zorn, a soldier returns from the battlefield to suburban California with the intentions of reconnecting with his estranged son and his ex-wife who is engaged to another man. It just so happens the soldier is Zorn, defender of Zaphyria and decapitator of the dark herdsman of Girth. Zorn’s still a family guy but he’s just a little more… animated than most other dads.

Son of Zorn is a hybrid live-action/hand-animated sitcom where a barbaric hero Zorn (Jason Sudeikis) from a faraway land — an ‘80s cartoon — tries to fit in with his family, who are desperate to move on from his cartoonish nonsense and live in the real world. Where Zorn once clashed with beasts and horde armies, now Zorn clashes with the mundanity of suburbia, hoping to find excitement outside his boring 9-to-5 job and one-bedroom apartment.

Before superheroes took over the box office, the heroes of ‘80s Saturday mornings were an eclectic crop of transforming robots, blue-collar ghost exterminators, and sword-wielding heroes from distant realms. He-Man and the Masters of the Universe and Thundercats, an example of the latter, are far and away the most influential cartoons of the era, but what influenced them and the sword and sorcery genre?

Heroic fantasies with beefy warriors have been around for centuries. The Greeks had Achilles, Jason, and Perseus — who is often portrayed beheading the monstrous Medusa and, of course, Homer’s Odyssey. The Norse also had heroes like Thor, the Japanese had the ninja Jiraiya, while the English made Beowulf, who is most known for fighting a CGI Angelina Jolie.

These forerunners to superheroes set the stage for the 20th century’s most seminal barbarians and sword-wielders like John Carter of Mars, Tarzan, and Conan the Barbarian who came from writers like Robert E. Howard and Edgar Rice Burroughs. These dudes, painted and printed on slick paper, often with a damsel in one hand and a sword in the other, defined an era’s masculinity and heroism that, for better or worse, echo in today’s comic books and other popular fictions.

The most recognized barbarian is Robert E. Howard’s Conan, who debuted in Weird Tales magazine in 1932. One of the genre’s definitive heroes, Conan lived in the fictitious Hyborian Age. His appearance was fluid; Howard himself said Conan will wear whatever garb is of the land and culture he’s in, but over time artists liked drawing Conan in loincloths with a hairless, muscular chest, exaggerating his savage persona. As evidenced by Son of Zorn, which depicts Zorn in an almost identical fashion, this has been an enduring image for similar heroes for decades.

However unintentionally, Conan went on to define ‘80s fantasy with John Milius’ Conan the Barbarian in 1982, in which Arnold Schwarzenegger fleshed out Howard’s pulp hero. (Jason Mamoa did so too, in a 2011 reboot of the same name.)

That same year of the Schwarzenegger film, Mattel debuted their new toy franchise Masters of the Universe, which bore a lot of similarities to Conan (though with more color and supernatural elements), driving owners of the two properties to court in 1984. From the fight, Mattel walked victorious.

To sell the toys, Mattel teamed up with Filmation in 1983 to produce a half-hour cartoon which aired in syndication, one of the first shows based on a toy to do so. (G.I. Joe aired two years later in 1985.) The cartoon, which is peak eighties alongside Voltron and Teenage Mutant Ninja Turtles, is an enduring cult classic, though its nostalgia resonates more with Generation X than it does with millennials.

Still, He-Man was no doubt a big part of Reed Agnew and Eli Journe’s childhoods. The creators of Son of Zorn, Agnew and Journe — both from the FX series Wilfred — likely grew up on these ‘80s cartoons, chief among them Thundercats. Centered on anthropomorphic feline aliens who fought the evil Mumm-ra from taking their new home planet Third Earth, Thundercats was more sci-fi than fantasy but its hero, Lion-O, is a staple of Gen-X nostalgia.

It should’t be a coincidence, then, that Lion-O bears a striking resemblance to Zorn, maybe even more than Conan and He-Man. With a red mane, a unique insignia on his buff body, and a beloved sword, Zorn is a concoction of ‘80s cartoon relics like Lion-O and He-Man tossed in a blender and filtered through the humor of late-‘90s Adult Swim (though a little tamer, because Son of Zorn is on broadcast).

No matter the influences, Son of Zorn is also very much its own creation that can stand on its own. A hybrid of adult/dry comedy that not only sends up a whole era of children’s animation but the droll inconveniences of suburbia, Son of Zorn is intent on carving its own path regardless of whatever Robert E. Howard or Edgar Rice Burroughs had intended. Zorn’s a barbarian, after all. What’s he going to do, follow the rules?