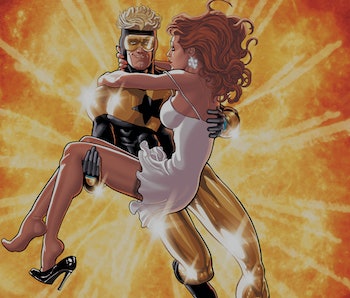 The arrogant, fame-seeking Booster Gold is so self-centered, he’s going to inhabit his own cinematic universe. Unfortunately, that kind of misses the point of the Booster Gold character.

DC TV producer Greg Berlanti told Vulture that his dormant Booster Gold TV show with longtime collaborator Andrew Kreisberg has been revived into a feature film — but even though it’s DC, it won’t be part of the interconnected DC universe with Ben Affleck’s Batman, Suicide Squad, and Zack Snyder’s forthcoming Justice League. And that’s too bad — because Booster Gold would be the perfect addition to the grim and dim Snyder-verse.

Booster Gold the film isn’t officially happening yet, but it would be unfortunate if Berlanti’s take on the arrogant dude from tomorrow is separate from the continuity Man of Steel started to build. Besides the fact that Henry Cavill’s dour Superman could use Booster Gold to make him smile, it works to Booster Gold’s advantage if there are existing, familiar superheroes for him to bounce energy off of.

If you don’t know who Booster Gold is, here’s the quick and dirty: Booster Gold is a self-serving ex-athlete from the future who steals a load of advanced equipment and travels to the past to become a celebrity. He’s in the superhero game for the fame, not for the altruism, to the dismay of the Justice League.

Booster Gold is in the same league as characters like Deadpool and Squirrel Girl. He’s irreverent and funny (though not foul-mouthed), and while he’s had serious adventures, he’s always reliable for a good laugh. It also matters that he exists in the same world of familiar superheroes. His entire personality hinges on the fact he’s trying to be the hero Superman and Wonder Woman are, but better, and solely for his own self-interest.

It’s not impossible for Booster Gold to exist in a world without superheroes and he can still be a self-serving prick — Deadpool made do with scant X-Men and no Avengers — but it’s also misguided that he would be. Of course, since Snyder’s Superman is the farthest thing from being a hero, maybe it’s good Booster Gold isn’t trying to one-up him.

Thor and X-Men: First Class co-screenwriter Zack Stentz is also working on the project, which has yet to enter production.